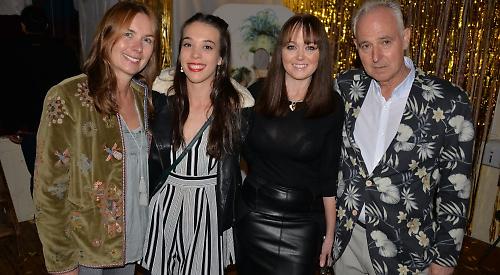 TV PRESENTER Ben Fogle was among the guests at a Seventies disco-themed party at Fawley village hall on Saturday night.

The event was designed to bring the community together at one of the few events held since the village pub, the Walnut Tree, was closed in 2003.

The organisers took their inspiration from one of New York’s legendary nightclubs, Studio 54.

About 80 guests were present with women in long dresses and men in wigs, flared trousers and wide-collared shirts.

They walked into the hall on a red carpet lined with cardboard cut-outs of photographers.

Inside there was a life-sized cardboard cut-out of Marilyn Monroe and another of a Brazilian carnival dancer with which guests could have their pictures taken.

The hall was decorated with gold streamers, ticker tape and
VIP-themed wallpaper.

The guests were served drinks from the “Molotov cocktail” bar and there were bowls of popcorn and mini champagne bottles filled with bubbles on the tables. Entertainment was provided by guitarist Rik Panesar and singer Sara Manfredda, members of the band The Covered, who played music from across the decades.

Later on in the evening they were joined by bandmate and villager John Read who sang.

Alison Ashby, chairwoman of the Fawley Village Association, which organised the party, said: “It was great fun and went really well.

“Some people love to dress up and we thought having a theme this time would be quite fun because the village hall is quite plain.

“The outfits were great. It was very much the John Travolta-type disco look we were going for.

“A turnout of 80 for a village our size is really good and it was lovely to see neighbours getting together and having a good time.

“We pride ourselves on being a friendly village and welcoming.

“Since the loss of the Walnut Tree we have had to go to great lengths to get people together.”

Lady McAlpine, who lives at Fawley Hill and helped organise the event, said: “It was a hoot. Everybody entered into the spirit of it and people made a real effort with their outfits.

“There was a lot of original Seventies clothes there, of course, including mine!

“Ben Fogle’s sister-in-law was wearing a long pink wig and said, ‘I came as you’ which I thought was lovely. The youngsters made an effort too.

“It’s so important to keep a village together. It’s quite hard because people work so hard these days. That’s why we did it — it has been so long since we had a village gathering.”

An application to demolish the Walnut Tree in Roundhouse Lane and build a new pub in its place, along with four houses, was approved by Wycombe District Council’s planning committee last year.

When the pub closed residents formed an action group as there were plans to convert it into a house.

“We organise about half a dozen gatherings a year just to try to keep the village together. I think that’s very important. You have to work at being a village if you don’t have a pub or a shop.

“We decided you had to have a hook to hang these things on. Villager Hutton Swinglehurst said ‘we should call it Studio54-ley’ because it flowed.

“I’m grateful to everyone who helped and to those who took the trouble to come.”