Broker’s privilege is to walk sheep over bridge 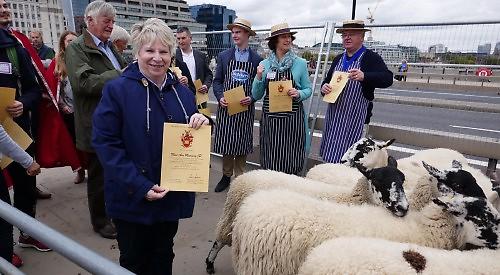 NOT many people spend their Sundays herding a flock of sheep across London Bridge.

But Henley insurance broker Ann Manning did just that at the weekend as she took part in a centuries-old tradition.

Ann, 66, was among 600 Freemen of the City of London who exercised their “right” to herd the animals into the ancient heart of the City.

Freemen were historically allowed to bring livestock and tools into the City without paying tax.

The tradition is carried on to this day, although now it is done to raise money for charity. Ann, who runs Manning UK in Reading Road and has been a freeman and a member of the Worshipful Company of Insurers for 10 years, paid more than £100 to take part.

The flock of 30 sheep was brought to the capital from Bedfordshire and Ann was in a group of eight people who took them from the south end of the bridge to the north at about 3.15pm.

Ann said: “As a freeman, I’m allowed to exercise my right to take sheep across the bridge once a year. It was absolutely bizarre but great fun and something that you don’t get to do very often.

“There were people in front of the sheep so they don’t escape or jump into the river and we were really just walking behind.

“It was quite surreal and very cold on the bridge but I’m really pleased to be able to do it.”

People can become a freeman by paying a fee or as a reward for public service.

The event raises tens of thousands of pounds for the Lord Mayor’s Appeal.