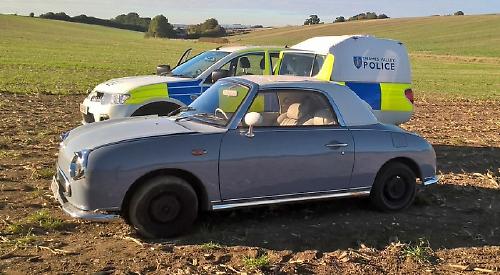 A CAR stolen in Sonning Common was found dumped in a field near Wallingford 10 miles away.

Sandra Onofrio’s Nissan Figaro was taken from outside her home in Ashford Avenue between Sunday and Tuesday  last week.

It was found by police on Wednesday and had not been damaged.

Mrs Onofrio’s daughter Chiara appealed for help finding the car on Facebook and more than 600 people shared the post.

Miss Onofrio thanked the community for their help.

She said: “Absolutely over the moon for my mum. Thank-you to everyone who shared and kept their eyes peeled.

“Such a shame that a minority of people have no morals, but teamwork goes a long way. It’s humbling to live in a community like ours, where we help one another out.

“Kindness really does go a long way — further than the car did anyway!”