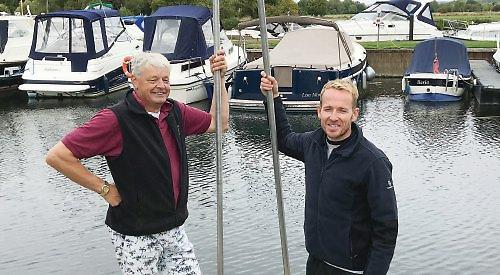 He visited the club off Station Road while filming for an episode of the BBC’s Escape to the Country last month.

He was taught how to punt by the club’s expert Matthew Gordon and then took to the River Thames to race alongside Mr Gordon in a doubles race against Sian Barr and Paul Worthington.

Despite falling into the water several times, 44-year-old Irwin made it along the course, although he wasn’t fast enough to beat his more experienced rivals. Brothers Marcus and Josh Chew, who are also members of the club, were also filmed racing each other.

Membership secretary Sam Barnard said: “They all enjoyed it and were here for about six hours.

“I think Jonnie found it a lot harder than he thought it was going to be.

“He pushed off the first time and fell straight in, which was a bit of a surprise for him!

“It was a nice thing for the club to be involved with and to be able to advertise punting on the Thames.”

The programme, which follows a house hunt in Oxfordshire, is expected to be broadcast early next year.