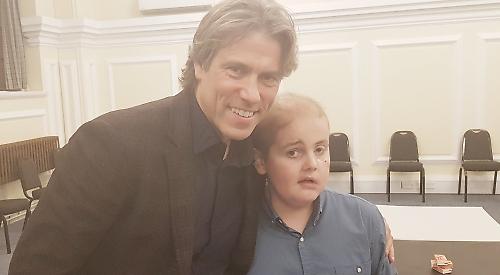 CHARLIE ILSLEY rubbed shoulders with celebrities when he took part in Channel 4’s Stand Up To Cancer campaign.

The 11-year-old boy from Emmer Green is undergoing treatment for two tumours on his spine and his story was featured on the live TV fund-raising marathon on Friday night.

He travelled to London with his parents Toni and Mark and siblings Oli, 21, and Jess, 29, and friends Erika and Esme Campbell.

They stayed in a hotel on Westminister Bridge before being taken to the venue.

Mrs Ilsley said: “They sent a make-up artist and some hairdressers to see if we wanted our hair done, which was really nice.

“We went through the stars’ entrance and when we got out of the taxi all the paparazzi were there and they put their cameras down! I felt privileged to be there but also really unlucky too —it was every emotion.”

The family spent the evening between the live studio watching the broadcast, a quiet room and a green room where they met several stars.

Mrs Ilsley said: “John Bishop spent so much time with us — he was lovely — as did Adam Hills.

“Tom Walker was about to sing upstairs live and Charlie said to Adam, ‘can you make it quick because I want to go and see Tom sing?’ Adam then said on air, ‘I’ve just met Charlie, he’s a really special boy but he didn’t want to spend too much time with me’.”

The filmed segment on Charlie was shown at just after midnight.

Mrs Ilsley said: “We were with the other families watching their stories.

“There were a lot of people who are worse off than we are and it makes you realise we could be where they are but we’re not right now. The clip was meant to be hard-hitting so that people donate. It’s hard to get really sad about it and maybe that’s because I’ve lived it for three years and Charlie’s still here and really well.

“It was a lovely evening and they looked after us really well. There were lots of sad stories but I’m so glad we went.”

The family returned to the hotel at about 1am and on Saturday were given tickets to see Aladdin at the Prince Edward Theatre in the West End.

Charlie was first diagnosed with a brain tumour about the size of a snooker ball in March 2015. Another tumour was found on his spine.

He underwent a 10-hour operation in April that year in which the brain tumour was partially removed. He then had 31 sessions of radiotherapy followed by chemotherapy before he was given the all-clear in March 2016.

Then in March this year two tumours on his spine were discovered. Charlie flew to Turkey with his parents to undergo CyberKnife treatment in an attempt to eradicate the tumours.

This is the latest in radiotherapy treatment and delivers a high dose with pinpoint accuracy but is not available to children at the John Radcliffe Hospital in Oxford, where he had surgery previously.

The family are now visiting Ankara every month so that Charlie can have chemotherapy treatment and he will have an MRI scan in Turkey on Monday to see if his tumours have shrunk.

However, Mrs Ilsley said they now need to raise another £35,000 in order for Charlie have stem cell treatment.