Dog owners demand action on fireworks that scare their pets 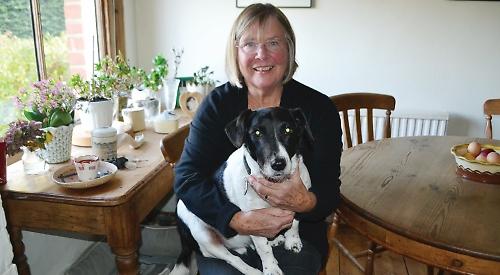 Readers have responded to our call for greater use of quiet fireworks and for people to attend official displays rather than staging their own at home.

Helen Gaynor, of Bell Street, Henley, says she can’t leave the house during fireworks because her two dogs, Rigsby and Miss Jones, get so upset.

The 14-year-old Patterdale terrier-Jack Russell crosses have to be comforted by her and her husband Alan.

“With animals it’s the flashing and the noise and they also sense the vibration. When people ask what we are doing on New Year’s Eve we say we will be wearing our terriers. We have to stay in now; there’s no way we could leave them, they would be too upset.

“We put each TV on to try to mask the sound and we have all the plug-ins. Nothing seems to work and it seems to have got worse as the dogs have got older.

“The only thing in their favour is that because they are 14 they are starting to go deaf. If we can get them to sleep and we are asleep too we might get through it but it’s really boring to be in bed before midnight on New Year’s Eve.

Mrs Gaynor said she sometimes sent her dogs away to stay with her parents when she knew there would be fireworks displays, such as during the Henley Festival.

She said: “Fireworks are a wonderful, joyous thing and something many humans love — I can still remember having sparklers and Catherine wheels in the garden.

“But I think you become more sensitive as you get older. I get disturbed by a car backfiring or a noisy motorbike so it must be really alarming for people who are particularly sensitive.”

Janet French says her Jack
Russell-cocker spaniel cross Pip gets worked up whenever he hears fireworks.

The 75-year-old, who lives in Western Road, Henley, with her husband Bill, said: “We had another dog who was terrified of them but Pip just gets cross.

“He wants to do battle and he’s very difficult to keep calm. I’ve learnt to try to keep him in before the events start. I shut the windows, draw down the blinds and turn the radio up and try to keep him somewhere he can’t hear them. I’ve never used any of these calming products.”

Mrs French, who volunteers at the Oxfam bookshop in Duke Street, said the worst times were when fireworks were being set off in nearby gardens.

“Sometimes the quivering goes on longer than the fireworks. One time he was in a state for most of the night.”

She said: “I don’t want to spoil people’s fun but why are they so loud? I think they have to reduce the bangs. There’s no need for them — you can still enjoy the spectacle.

“When I was younger there were fireworks only on Bonfire Night, not for weeks on end. Now people seem to set off fireworks for any occasion.”

Sheila Plumridge, 80, of Swiss Farm, Henley, said her six-year-old Chinese crested powderpuff Faye is terrified by fireworks and crawls under the bed to try to escape the noise.

She said: “When the fireworks are going off she’s absolutely terrified and I wish to God they wouldn’t keep going on with them. She rushes under the bed trembling and won’t come out until the morning. I just have to leave her.

“She has always been like that but it has got worse since we came to live here.”

She said: “They are so loud, why do they need these big bangs? Faye can sense them coming and goes nuts. You have got to have organised displays but all the ones in gardens should be stopped.

“There are also kids running around the streets with them and that should be stopped.”

Mrs Southby, of Greys Hill, Henley, said: “He’s terrified. The loudest ones go off at Makins [recreation ground] and he jumps into my lap. He won’t sit still and fidgets as he’s terribly frightened.

“I’m 100 per cent in favour of quiet fireworks. A lot of people realise fireworks distress animals but I think young people have no idea.

“Some people are so incredibly selfish — it’s me, me, me.”