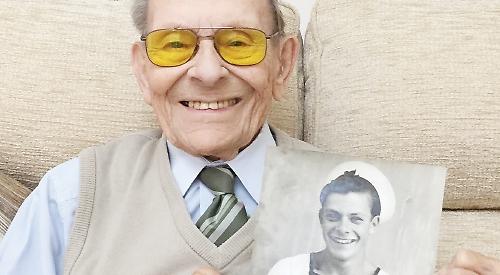 A BLIND war veteran from Watlington will be taking part in the march at the Cenotaph in London on Remembrance Sunday.

Ken Cook, 94, of Orchard Walk, will be joined by more than 100 other former servicemen at the event, which is supported by the charity Blind Veterans UK.

It will be the first time he has taken part in the parade, which this year will commemorate the centenary of the end of the First World War.

Mr Cook joined the Royal Navy in 1942 and served in the Mediterranean and Italy during the Second World War.

He took part in various missions, including the invasion of Anzio in 1944.

He said: “I had always admired the armed forces so I signed up and did my bit. I’ve had the greatest of respect for all servicemen and women ever since.

“This will be my first time marching at the Cenotaph and it’ll be the most important day I will have had for a long, long time.

“I will be remembering all those that served but with the centenary of the end of the First World War, I will be especially remembering my father, who served as a staff sergeant farrier in France during that conflict.”

Mr Cook, who left the navy in 1946, lost his sight in later life due to macular degeneration, a deterioration of the retina which often affects older people.

In 2016, he started receiving support from Blind Veterans UK, which pays for a volunteer carer called Sue to visit him once a week.

Mr Cook said: “Her visit has become the highlight of my week. She helps me with bits and bobs and it’s great to have a cup of tea and a chat.

“I genuinely don’t know what I would have done without the help of Blind Veterans UK. The guidance and equipment I’ve received from them has allowed me to live on my own and look after myself, even after sight loss.”

The charity was formed in 1915 in response to the 3,000-plus veterans blinded in the Great War. Now it supprts veterans regardless of when they served or how they lost their sight.