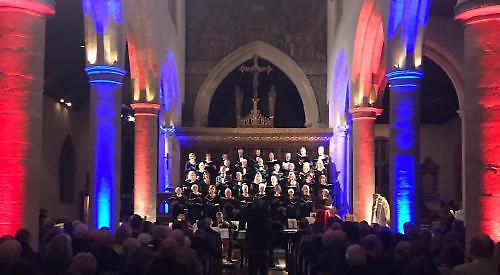 THE chairman of the Henley and Peppard branch of the Royal British Legion has thanked the public for its “unprecedented” support over the remembrance weekend.

John Green was speaking after thousands of people attended the Armistice Day parade and services in Henley and the surrounding villages with some of the biggest turnouts in years.

Mr Green, who carried the Legion’s standard during Sunday’s parade in Henley, said: “The last few days have seen such an unprecedented response to the many events commemorating the centenary of the end of the Great War.

“To see the community of Henley and the area come together in such huge numbers to honour the fallen and pray for hope and peace in the future was very moving. Thank you to you all.

“The participation, turnout and enthusiasm of the army cadets, air cadets, sea cadets and royal marine cadets was especially appreciated.” Mr Green, 83, from Maidensgrove, said: “I would like to thank those individuals and groups who have made Remembrance 2018 a year to remember.

“Some highlights were Gillotts School’s performance at the Kenton Theatre, the planting of a centenary tree at Northfield End green by the local residents’ association and the sublime concert created by the Aliquando Chamber Choir at St Mary’s Church.

“All of the above made much-needed contributions for the Poppy Appeal.”

A sell-out audience of 300 attended Saturday’s concert. A ceremonial element in the second half involved a procession. During the hymn Make Me a Channel of Your Peace nine cadets holding candles stood in the middle of the aisle.

Aliquando musical director Anne Evans said: “It went better than anyone ever expected. The first half was purely musical and the second half was reflective and thought-provoking.

“I’m delighted and very, very proud that it worked so well. The choir sounded fantastic, the orchestra was amazing and the audience participated in the two hymns. I was just overcome by the reception we had.”

On Sunday night a beacon was lit at Makins recreation ground, off Greys Road. It was one of more than 1,200 beacons across the country that were lit as part of Battle’s Over, a nationwide tribute to the millions who were lost or served in the war.

The gas-fuelled beacon was last lit by Mayor Glen Lambert and the Last Post was played.