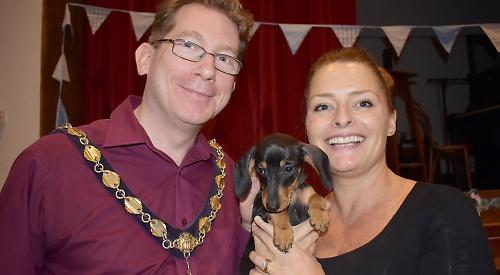 A PARTY for sausage dogs and their owners raised £200 for Henley Music School.

About 25 dachshunds and more than 50 people attended the event at Harpsden village hall on Saturday.

The animals played with one another as their owners enjoyed homemade cake and hot drinks.

Refreshments were served by families of pupils at the school, a registered charity that provides music tuition in groups and on an individual basis for children in the Henley area.

There were competitions in various categories, including the dog with the waggiest tail, and a raffle with prizes including sausage-dog themed homewares by designer Fenella Smith, from Henley. Fawley Vineyard donated a bottle of sparkling wine.

Guests included Justin Bowater and his daughter Millie, 17, from Henley, who attended with their dachshund Willow and her puppies Lila, Domino, Helga and Polo.

The latter three were sold but the Bowaters keep in touch with the buyers’ families through social media and share updates and photographs.

It was the first time that the litter had been reunited since the dogs were sold in January. They celebrated their first birthday the following day.

Mr Bowater, who runs a catering consultancy and lives in St Mark’s Road, Henley, said: “It was a lovely day.

“Owners don’t usually stay in touch after buying or selling a dog so it’s so nice that we’re in touch with the families of Willow’s gorgeous puppies.

“Their owners are all wonderful people and I think they had a great time as well. I didn’t know much about Henley Music School beforehand but it’s such a good cause and I’m all up for doing more to support it in future.”

Party organiser Laura Reineke, who runs the school and attended with her own dachshund Mavis, judged the competitions with Henley Mayor Glen Lambert.

Mrs Reineke, who has set up a Facebook group called Sausages of Henley, said: “It was absolutely hysterical, really good fun and so lovely to meet all the other sausage dogs and their owners in Henley. It didn’t raise an awful lot of money but it was so unusual and bonkers that it didn’t really matter.

“It was hard work as sausages aren’t well-behaved at the best of times so assembling them in a large group is interesting.

“They’ve got such big personalities for such small dogs but they mostly enjoyed themselves.

“There were a few ‘accidents’ but nothing too disastrous and I think it was mostly due to being happy at being with so many others like them. They’d never experienced anything like it before and neither had their owners!

“There were more guests than I had expected — they really came out of the woodwork.

“Dachshunds are such affectionate and loyal little dogs with great personalities and really bring a smile to your face.”

Mrs Reineke, who lives in Berkshire Road with her husband Antony and children Mae, Ava and Alife, has owned dogs for most of her life and bought Mavis about two years ago. She came up with the idea of the party in the summer after seeing lots of other dachshund owners while out walking her dog.

She said: “It just struck me that it would be a lot of fun so I had to give it a go. I made leaflets and would stop to give them to owners while I was out and about — even, to my daughters’ embarrassment, if we were in the car!

“Everyone thoroughly enjoyed the party and I would love to do another one.”