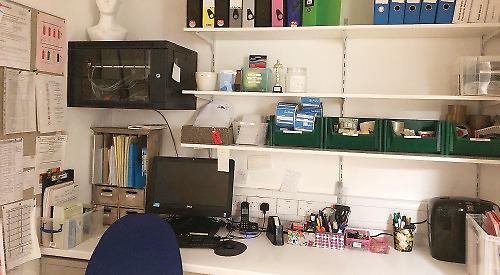 Kate Smith, from Wargrave, and Louise Floodgate, from Henley, decluttered the office, storage area and staff kitchen at the Sue Ryder shop in Duke Street, for manager Beth Pettifer.

They both run home organisation companies and are members of the Association of Professional Declutterers & Organisers.

As part of the association’s fifth annual National Organising Week, they spent almost eight hours at the shop, overhauling the back rooms.

They organised items into designated areas which were then labelled so staff can find things.

Mrs Smith, 39, who is married with two children, said she chose the shop as she often takes donations there and because Mrs Pettifer is a neighbour in Fidler’s Walk, Wargave.

She said: “In my business I counsel people through letting go of possessions and take a lot of donations from clients to Sue Ryder.

“I know Beth enough to say ‘hello’ and thought this would be a way to help Sue Ryder and have that local connection.

“We were there for seven-and-a-half hours. The office space was the fullest. They have a constant stream of donations and Beth had no time to clear it up herself. Because they have a lot of volunteers it’s important for her to have everything labelled so everyone knows where everything has to go.”

The office alone took almost half the time as the women cleared and organised it so the files and office supplies were in specific areas while other items went on display in the store.

Mrs Smith said: “We had to take everything out and found a lot of stuff that could go on the shop floor.

“The staff kitchen was also full of old boxes so there was nowhere for the staff and volunteers to escape for a break.

“We got about a third of the storeroom done but donations kept coming in while we were there so we saw how demanding Beth’s job is. Louise and I had a great time helping Beth with her organisational challenges. It felt very rewarding to be doing it for such a great cause. It was quite a big job but lots of fun.

“Beth was blown away and so grateful. It saved her about four months’ work trying to chip away at it in any spare time she had, which is very little.

“She also says she and the team are managing to keep it that way now.”

Mrs Pettifer said: “My office is always the thing I never get round to doing. They organised it so well.

“It has saved me a huge amount of time which I could spend doing other things.

“Now everybody knows where everything is and it has been done in such a way that we want to keep it how it is now.”