What a cracker of a Christmas festival 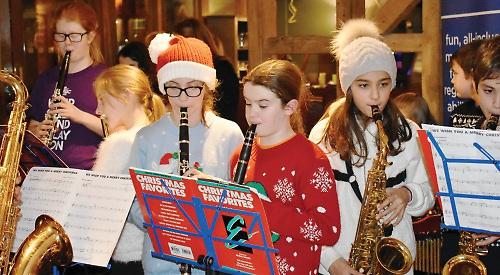 THOUSANDS of people took to the streets for the Henley Christmas Festival.

Roads in the town centre were closed for the event on Friday evening as dozens of food and charity stalls, fairground rides and other attractions were set up.

Many shops stayed open late and some served festive refreshments including mulled wine to shoppers.

The celebration began with a children’s lantern parade from the River & Rowing Museum in Mill Meadows to Friday Street.

Dozens of youngsters took part in the parade and many carried lanterns they had made at workshops at the museum and decorated with coloured tissue paper, ribbons and cellophane.

The parade was led by three reindeer, from Riverways Farm near Wargrave, as well as Mayor Glen Lambert in his official robes and town crier Ian Beyts.

Many spectators took pictures of the parade as it passed them.

When the children reached the Hot Gossip coffee house they were served hot chocolate and showered in fake snow from a machine in the window of a neighbouring property.

The reindeer were moved into a pen where large numbers of people crowded around to pet the animals and take pictures.

Many children from the parade then made their way to the large Christmas tree in Falaise Square to sing carols while hundreds of others queued up to see Father Christmas in his grotto on the stage of the Kenton Theatre in New Street.

Long queues formed as the youngsters waited for their turn go inside. They were entertained by the cast of the theatre’s pantomime, Dick Whittington, with Kieran Parrott and James Tobias Clifford in full costume as King Rat and Timmy the Tom Cat.

Members of the Henley Amateur Operatic and Dramatic Society sang songs from their forthcoming production of Irving Berlin’s White Christmas at the theatre.

Staff from the museum offered the children face-painting in the foyer and theatre staff served mulled wine to the adults. A large stuffed unicorn and reindeer provided by Asquith’s teddy bear shop nearby were on display.

Every child who visited Father Christmas was given gingerbread in the shape of cats made by Lawlor’s bakery in Greys Road.

The grotto itself was decorated with furniture donated by Vintage Look in Hart Street.

Theatre manager Paula Price-Davies said: “We were absolutely rammed all night and there was a fantastic atmosphere. A queue started forming at about 3.45pm and it was constant until 8pm. We still had people coming in at 8.25pm and I think we had about 350 children altogether.

“The children were in awe as they came in; it was really magical. They were all saying what a fantastic idea it was. The star of the show was Father Christmas’s little dog, Lucy.”

An old-fashioned fun fair was set up in Hart Street, with attractions including a test-your-strength machine, wooden swing boats and a miniature carousel where the children could sit in little aeroplanes.

The Coppa Club in Bell Street, the Catherine Wheel and Magoo’s in Hart Street and Harris + Hoole in Duke Street also had stalls while Hotel du Vin in New Street sold healthy snacks and drinks in partnership with Fitness Space Henley.

Other shops taking part in the festivities included the Act 1 Scene 1 coffee shop and Snappy Snaps in Bell Street and Biggie Best in Duke Street.

The highlight of the evening was the switching on of the lights on the 28ft Nordmann fir tree in Market Place, which was sponsored by Invesco and supplied by the Tree Barn in Christmas Common.

This was carried out by seven-year-old Freddy Burton, a pupil at Valley Road Primary School, who won a competition to design Mayor Glen Lambert’s official Christmas card.

Before the ceremony Freddy and his parents Tom and Laura were invited into the mayor’s parlour in the town hall.

Festival-goers flocked to the town hall steps for the switch-on, where Freddy and the Mayor were joined by councillors, singers and members of the pantomime cast.

Councillor Lambert gave a speech but the audience didn’t hear much of it due to a technical problem with his microphone.

He then led a countdown before Freddy pressed the button. There was laughter as the lights failed to come on for several seconds and then the tree and the rest of the square were lit up and the crowd cheered.

Choirs from Gillotts School, Rupert House School and the d:two centre in Upper Market Place then led the carol singing from the town hall steps, accompanied by the Woodley Concert Band.

Cllr Lambert said: “It was fantastic to stand on the town hall steps and see so many people packed into the square. I had the best view and it was great having Freddy there to turn on the lights. There were a couple of technical difficulties but they didn’t detract from the event. There was a very good atmosphere and all the feedback I received was very positive.”

David Feary, of Walton Avenue, said: “I loved the children’s procession and the lanterns. The reindeer were a great hit.

“For once it felt like a Christmas celebration and I don’t recall a more friendly, relaxed and busy festive event in the town.”

Paul Camburn, from Henley, who was there with his daughter Rose, said: “It’s a good, fun, community thing to do in a market town.

“There’s nice things for the children, which is what it’s all about. It marks the start of Christmas. We come every year and love it.”

Rebecca Crayford, who lives in Henley, was with her daughters Ella, nine, and Sophie, seven, and arrived early to avoid the crowds.

She said: “It’s a good time to come as it’s less heaving. It’s more for the children than anything.”

He said: “I’ve been lots of times and really look forward to it. My favourite bit is bringing all my friends and family together and going out. I also like the turkey hats!”

Tom and Caroline Oliver, from Henley, who attended with their children Lexa, one, and Harrison, five, said: “This is probably our third or fourth year and we always really enjoy it as it’s fun and has a festive atmosphere.”

Harrison added: “I love the rides.”

Tom Grange, of Reading Road, Henley, who attended with his wife Gemma and sons Noah, two, and Lucas, five, said: “We’ve lived here for seven years and have attended most years, originally for drinking but now it’s more for the kids.

“It’s looking pretty good this year and we’re really enjoying it. The streets don’t seem so crowded, which is good for the children.”

Roz Edwards, from Peppard, who was there with her husband Phil and children Maddie, six, and Barney, three, said: “We’ve been for the past six years and always have a great time. The kids love it and it’s a great start to the Christmas period as it really gets you into the festive spirit.”

Town and community manager Helen Barnett said: “We were trying to make it much more about Henley, which I think we achieved. There was mix of stalls and a smaller funfair, which is more in keeping with a town like Henley.

“A lot of the retailers came out of their stores and joined in, which was great. The town was very busy and there was a lovely atmosphere, which everyone commented on. Everybody had a lovely time and the reindeer were a big hit!”