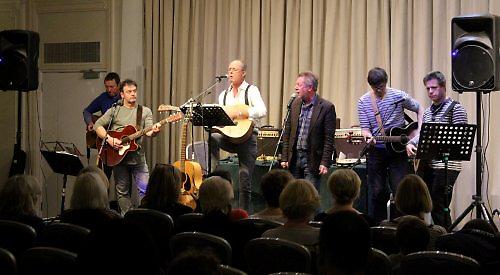 More than 100 people packed into the Finlay Suite to hear an uplifting 30-minute set led by frontman Ian Desmond alongside Bill Ford.

Tracks included renditions of Let Her Go by Passenger, Rocket Man by Elton John, Me & Julio by Paul Simon and Dakota by the Stereophonics.

Visitors were all treated to mulled wine, hot chocolate and stollen by the hosts while the event was in aid of Riverside Counselling.

Organiser Richard Rodway, who chairs the calendar, said: “It was a terrific set from the band. They performed in freezing conditions outdoors last year, so it was only fair that we brought them inside to this sort of wonderful setting where they could actually feel their guitar strings.

“We’ve had good audience numbers, with great spirit and generosity so far, and hopefully the weekend has set the tone for the next 22 nights”.

The night was sponsored by Grey Matters Consultancy, and after the performance Caroline Romero thanked the band and the audience.

Tonight’s performance (Monday) will be on the terrace at the Angel on the Bridge pub.