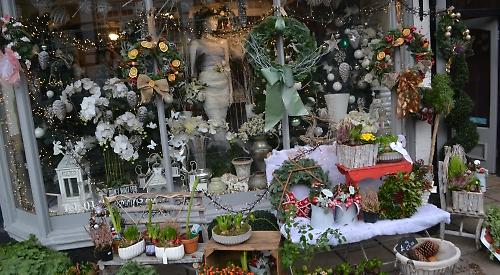 A SNOW Queen was the centrepiece of this year’s winning Christmas front window display in Henley.

The display at White Gdn florists in Hart Street was designed and put together by the owner Annette March and shop manager Alice Murphy.

Seventeen businesses entered the competition, which had a theme of “The Greatest Snowman”.

Each window had to feature the theme from a Christmas film of their choosing and a decorated snowman and showcase the business’s own trade or profession.

Miss March, 29, wanted to recreate the title character of the 2002 television film Snow Queen, which is based on the story by Hans Christian Andersen and stars Bridget Fonda.

She said: “The Snow Queen had a winged cape which I liked so we made our own character. I was also inspired by the villages around Henley where I deliver as there are lots of trees that, when frozen, look like icicles so we tried to create that.”

It took the pair three days to create the display. After emptying the window, they put down a “snow” blanket before assembling Christmas trees and adding lights and the queen mannequin as well as mix of artificial and real flowers which they sell.

Miss March said: “Her wings were made using chicken wire and flowers which we wrapped in organza and we made her a crown of flowers and spruce. We added arrangements of the kind that you have over Christmas, with orchids and lights, which are nice to have on at a dark time of the year.

“Our window grabs people’s attention when they come past it, including those stuck in traffic. I am delighted to win as Alice worked really hard on it.”

The women were presented with a trophy, a £125 prize, certificate and a bottle of champagne by a judging panel that comprised Deputy Mayor Ken Arlett and his escort Dorothy Arlett, Richard Rodway, who chairs the Henley Living Advent Calendar, estate agent Phil Booth and town and community manager Helen Barnett.

Berries coffee shop in Hart Street was the runner-up and won £100, the Thames Hospice shop in Duke Street was third and won £75 and the Kiln Ceramic Café in Reading Road came fourth and won £50. All three also received a bottle of champagne.

The other businesses that took part were Candela in Reading Road, Dorata hairdressing, Frost Borneo and the Vintage Look, all in Hart Street, VH & Co, Sue Ryder and Biggie Best, in Duke Street, Crew Clothing, White Stuff, the Henley Pet Shop, Bell Street Bookshop and Snappy Snaps, all in Bell Street, and the Regal Picturehouse in Borama Way.