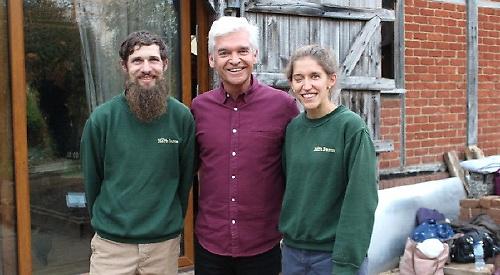 TELEVISION presenter Phillip Schofield handed out mince pies and festive treats as he filmed a new Christmas show at the Herb Farm in Sonning Common.

The This Morning frontman, 56, who lives in Fawley, spent a day at the centre in Peppard Road for his ITV consumer show How To Spend It Well At Christmas.

In the programme, Schofield invites celebrity guests, experts and members of the public to help him with experiments to determine the best Christmas presents.

The Herb Farm episode, which was filmed in October, focused on festive food and drink and locals were invited to taste and rate a range of goodies.

The filming took place most of the day and Schofield was there from about 9am until 6.30pm.

In the morning, florist Jo Wise, who runs Floral Circus in Wallingford, led a Christmas wreath-making workshop and Schofield handed out desserts and asked the participants for their thoughts.

In the afternoon, a rock choir sang carols in the café, which was decorated with fairy lights, wreaths and a Christmas tree. Schofield served mince pies to the singers to try.

Parts of the centre were closed for the day but staff and customers were able to meet Schofield, who posed for pictures.

Manager Helen Burton, who runs the centre with her husband David, said: “Our staff got very excited about it and all bombarded him with selfies.

“We had a brief chat with him and he was very friendly and down to earth. He said he had enjoyed visiting the Herb Farm and that his wife was aware of us but he’d never been before.

“It was a lovely day — all the crew were very friendly and our customers were very understanding.”

Mrs Burton said she received only a week’s notice of the filming. She said: “We didn’t know what to expect on the day but they had everything very well prepared.

“We were still open but had posters up explaining to customers that there was a reduction. We had to shut the café in the afternoon but everyone was really understanding and obviously quite excited too.

“Two ladies in the shop were browsing at one point and Phillip Schofield walked past them. As he left they did a double-take!

“It will be quite interesting to see how it comes out and how much it looks like the Herb Farm. Hopefully it will be recognisable!”

• The episode will be aired on ITV 1 at 8pm on Tuesday.