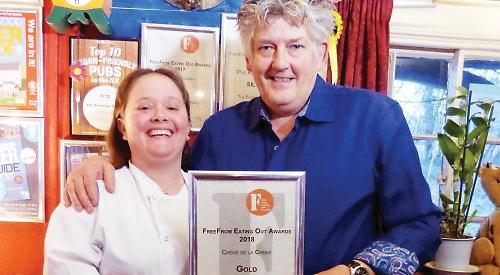 A PUB has been awarded gold in the highest category of the FreeFrom Eating Out Awards.

The Flowing Spring in Playhatch was one of 17 businesses shortlisted in the crème de la crème category of the awards, which recognise food outlets and manufacturers that cater for people with allergies and other dietary intolerances.

The pub, a free house, has been run by Nick Willson and his wife Hazel Lucas since 2010.

They began by offering meals for vegetarians, vegans and those with gluten and dairy intolerances and have since expanded the menu.

In November 2016 they were awarded silver in the pub and restaurants category.

The judges visited the Flowing Spring unannounced in September.

They said: “The staff were very friendly and welcoming. They told us that the environment in the kitchen was free of wheat flour and they had separate areas to ensure food was gluten-free.

“The portion sizes were very generous and very flavoursome. For a pub, this is a rare find. To see such a diverse range of foods that cater for many allergens and plenty of choice for vegans is refreshing.”

Mr Willson said: “These awards are run by food industry experts whose sole focus is offering information and support to food allergic and intolerant consumers and to the health professionals who care for them. To be recognised at this top level was totally unexpected. There are many superb outlets across the UK striving to support people with serious dietary needs and it’s an absolute honour to be acknowledged for the part we play.”

Ms Lucas said: “We have been recognised at the very highest level for our efforts. We’re extremely proud.”

The awards, now in their fifth year, were presented at the ExCel in London’s Docklands as part of the Food Matters Live Show.

Meanwhile, the Bull & Butcher pub in Turville has been nominated for an award.

It is on the shortlist for rural pub of the year in Countryside Alliance Awards for which the nominations are made by the public.

Landlord James Orford said: “The breadth of support has been amazing. Walkers, dog owners, farmers young and old, the horsing community, our local artists and musicians, the Visit Chilterns group and especially all our dining guests and wonderful locals — thank you for all you have done to ensure this wonderful rural setting is thriving.”

The 14th annual awards are designed to reward skills, produce, tradition, enterprise and the people behind the businesses.

Nine regional champions will be invited to Parliament for the national finals in June.