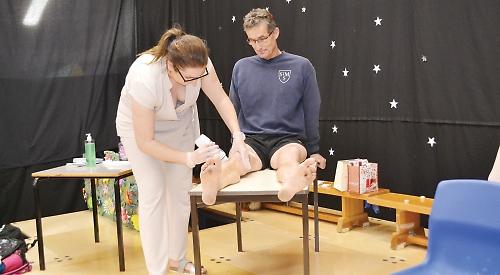 TWO teachers at a Henley school had the hair removed from parts of their body to raise money for the treatment of a boy fighting cancer.

Adam Stangroom had his head shaved and Stephen Downes had his legs hot waxed in front of dozens of pupils, parents and colleagues at St Mary’s School in St Andrew’s Road.

They were raising money for five-year-old Oliver Warner, who lives near Mr Stangroom in Bramley, Hampshire, and has neuroblastoma, a rare type of cancer that affects the nerve cells.

His family needs to raise £500,000 to take him to Spain for immunity treatment and then to America for further treatment. Mr Stangroom’s wife Karen teaches at Oliver’s school which the couple’s son Daniel, nine, also attends.

The music teacher decided to get involved after seeing some of the fund-raising that had been done in Bramley and Mr Downes wanted to offer him some moral support.

Teaching assistant Frances Williams shaved Mr Stangroom’s head, taking the clippers to one of the lowest settings with encouragement from the audience.

Afterwards, Mr Stangroom held some of the clippings in his hands and pretended to cry, to the amusement of the pupils.

He said: “Oliver lives three streets down and the whole village has rallied round and raised almost £80,000.

“They need £203,000 to get to Spain and spend eight months there for immunity treatment. After that he will be well enough to go for proper treatment in America.

“Fund-raising is not about the thing you do, it’s about making a fuss and it just seemed like a silly enough thing to do. Most of my hair will grow back!”

Mr Downes, a PE teacher, was waxed by Georgia Harris and Eva de Souza, of Cannelle Medispa in Hart Street, Henley. He laid on a table as they covered his legs in wax before pulling off the hair with strips.

Mr Downes said: “It’s a good cause. I chose to have my legs waxed because it’s painful!

“Oliver is going through far worse than I was so it was worth it.”

The men have so far raised £1,500 and Mr Stangroom hopes he can make even more.

He said: “With everybody that was here today there will hopefully be a flood of extra interest. Everyone has been so generous.”

To donate, visit www.just
giving.com/fundraising/stmarys
fundraisingforoliver or text SMOL50 and an amount from £1 to £10 to 70070.