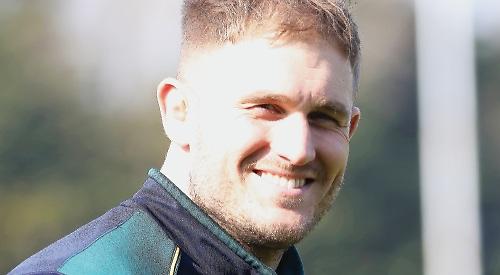 THE head coach of Henley Hawks says he is not thinking about promotion despite the side sitting near the top of the league.

A run of 11 wins in 12 games has seen the Hawks climb to second place in the National League 2 South table but Luke Allen insists a top-five finish is still the aim this campaign.

Allen, who succeeded long-serving coach Pete Davies in May, says he is happy with his first seven months in charge of the team and wants to enjoy the festive period.

He said: “For me and the coaching staff the first half of the season has gone unbelievably well.

“The mood in the camp is brilliant, everyone is confident and there’s a great culture around the team, not just with the Hawks but the Bulls (second team) too.

“We are trying to create an atmosphere at the club and I think we have succeeded in that.

“I’m pleased with the buy-in from the players. We sat down in pre-season and said this is where we are so far and what we need to work on.

“We said no-one is bigger than the team, the team is the central focus and everyone has done that, from the staff to the fans and of course the players.

“The collective effort from everyone has been fantastic and the reason why we’ve had so much success.”

The recent form shown by the Hawks has seen some players and fans talk about promotion back to National League 1 for the first time since 2016.

But Allen says he and co-head coach Tom Gardner have a long-term plan for the side and are not targeting promotion this season.

He said: “I know promotion has been bandied about but I don’t want to think about that. The ambition is top five so we’re not focusing on promotion just yet.

“We approach each weekend as an occasion and if we start looking ahead of ourselves that’s a different type of pressure we have got to manage.

“At the moment we are just putting pressure on ourselves to be the best team each week, rather than having to win every game to get promoted.

“Tom and I have a three-year plan to develop the team. We want to establish ourselves in the league first and then kick on from there. When the time comes for promotion we will get plans in place for that.”

During pre-season, Allen boosted the playing staff with several new recruits, including RAF players signed through Gardner’s association with the organisation.

He says they have settled in well and have helped the team dynamic.

Allen said: “It’s really important when you start getting players in that they don’t detract from what the team is about. The RAF boys have really helped establish the core of the team and other new players like Alex Bradley have done a fantastic job too.

“The existing players like Xavier Andre, Connor Morrison and David Hyde have also raised their game. It’s difficult to pick out any specific players because they have all mucked in and helped in their own way to create a team.

“One big factor has been the co-captaincy of Jake Albon and Sam Lunnon. They have worked really well together, it’s good to have someone who is used to the club in Jake and someone who is new in Sam.

“They have ensured standards are kept week in, week out and have been great at managing expectations and egos.”

Despite the side’s success, Allen says he wants to see them win games more comprehensively in the second half of the season. He said: “We have been really good at digging in and getting ugly wins but what top three teams do is win with confidence and win games well.

“We don’t want to be scrambling for points at the end of games, we want to wear teams down in the first half and then get points in the second half.

“We want to win games well in the second half of the season.”

Hawks will host table-toppers and local rivals Rams early in their first fixture of the New Year on January 5.

In the return fixture in September, Henley were outclassed in a 43-13 defeat but Allen says his side are a different proposition now.

He said: “I’m excited for that game, they are top of the league for a reason. When we played at their place we were quite an inexperienced team but we are gelling well and it will be a different game.

“The boys will bring a challenge to the Rams. We’ll go in to it hoping to win and we know we can challenge in the right areas.

“We’ve got a good pack which can match them and with our backs the running of angles and speed of hands has come on as well. It will be a really good game and we are in a much better position than we were.”

Allen, the club’s former forwards coach, joined Henley as a player in 2013 from Cinderford where he had a successful playing career for three seasons.

Davies ended his eight-year coaching association with the club after a ninth-placed finish last season.