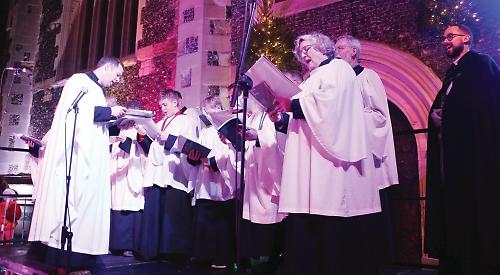 The 24 nights of entertainment from December 1 to Christmas Eve made £5,600, just £260 short of the record total set last year.

The final performance took place outside St Mary’s Church in Hart Street in front of about 300 people.

The church choir, led by Rev Jeremy Tayler, the new rector of Henley with Remenham, sang The First Noel, Ding Dong Merrily On High, Hark! The Herald Angels Sing, Away in a Manger and O Come All Ye Faithful.

Members of the audience were given song books so they could join in as well as enjoying mince pies provided by the church.

Town councillor David Eggleton was dressed as Father Christmas and gave out glow sticks to children and also provided all nine of the prizes for the raffle. The evening raised £530 for Mayor Glen Lambert’s chosen charities and good causes during his year of office, Henley Music School, Gillotts School and the campaign to launch a respite service for dementia sufferers and their carers.

Richard Rodway, who organises the calendar, said: “We’ve raised more than £5,600 and supported 26 good causes along the way. While we did not quite match last year’s total, we’re thrilled with how much people have so generously donated.

“We really enjoyed all the nights this year. There was a real joyous coming together of all parts of the community night after night.”