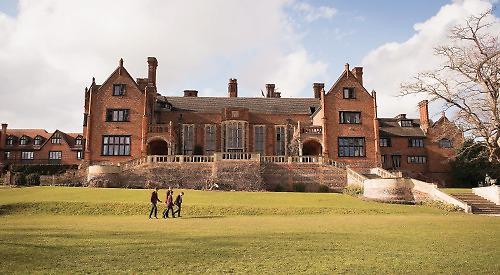 The independent school has launched its “Shiplake at 60” project and between this month and the end of June it will be publishing highlights of what happened in each year of the school’s history.

From images to artefacts, stories and other objects, the project will give an insight into how much the college has changed since its foundation on May 1, 1959 while its ethos and values have remained the same.

The first artefact is the original advertisement for Shiplake Court House, which was put up for sale by the BBC in 1958. The corporation had bought it in 1941 from the executors of Lord Wargrave, who had lived there from 1925-1936.

The original listing includes five reception rooms, 31 bedrooms, a boathouse, an orchard and even the island on which its year nine pupils spend a night every year.

Headmaster Gregg Davies, who will retire after 15 years at the end of this school year, said he was proud to oversee the 60th anniversary.

“It’s a significant milestone,” he said. “I remember, of course, when we had the 50th and so many things have changed. Our academic results have really improved from that time.”

The school has grown in the last decade from 320 pupils to 490 and there are 58 girls in the sixth form compared with 12 when Mr Davies arrived.

Other highlights have included the opening of the John Turner building, a
£4.3million arts block, in 2014 and improvements in its rowing programme which has seen the college reach the Friday and Saturday of Henley Royal Regatta in the last three years.

Mr Davies said: “As you get older you become more interested in where you’ve come from. I think 60 years is a significant anniversary now for our young people to learn a little bit more.

“We’re really young and we’re now getting into a generation of grandparents. These early guys are now into their seventies and eighties and that kind of brought it home to me.”

The celebrations will include a lunch on April 27. All current, prospective and former parents, Old Vikings, governors, staff and other friends of the college are also invited to celebrate the anniversary at a diamond ball on June 22 from 7pm.

If you have any college memories or artefacts, email alumni and events officer Catherine Brazil at
oldvikings@shiplake.org.uk