Student is runner-up in home race 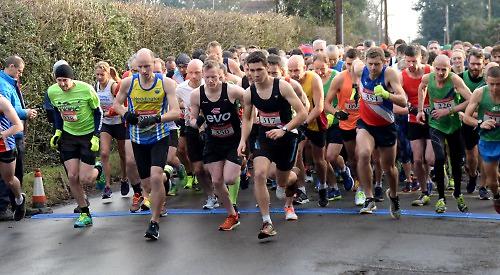 A STUDENT from Goring was the runner-up in this year’s Woodcote 10km.

Jonty de la Harpe finished in a time of 35 minutes and 15 seconds, about eight minutes faster than his previous time in the race in 2014.

He was one of more than 400 people who took part in the annual event on Sunday, which was organised by Pangbourne Rotary Club. There were 380 finishers.

Mr de la Harpe, 20, who lives in Holmlea Road and studies geophysics at the University of Durham, is a keen runner who regularly takes part in fell racing events for his university.

He was cheered across the line by his parents Peter and Carry and grandfather Brian Cheadle, from Woodcote.

After the race, Mr de la Harpe said: “It was very tough as that last hill really takes it out of you — you’re really not expecting it to go on for so long and it’s just relentless. However, it’s a great race and I did much better than my last attempt five years ago, although I found it much harder just because I was trying much harder.

“I hadn’t done much training, it was more a case of getting the training in before Christmas and then laying off the beer and turkey as much as possible.”

His mother said: “I’m very proud of him and I’m so glad that we could come and support him as he runs all over the country and we can’t always get out to watch.”

Mr de la Harpe previously set a junior course record at the Longworth 10km as part of a team of staff and pupils from Abingdon School.

The runners set off from outside Langtree School in Reading Road and ran down the hill towards Goring in Elvendon Lane and Battle Road before heading north at the village outskirts. They then faced a lengthy uphill return to Woodcote along Icknield Road and South Stoke Road.

The winner was Aaron Burgess, from Abingdon, who was making his debut in the race and came home in 34 minutes and 37 seconds. David McCoy, 28, from Reading, finished third just eight seconds behind Mr de la Harpe.

Mr Burgess, 37, said: “It lived up to its name as the ‘tough one’ as the first 5km tricks you into thinking it will be easy, then the second half feels like an endless uphill slog. It was good fun, though, and I’d definitely do it again.”

Chris Lucas, 27, from South Stoke, who won last year and holds the course record of 34 minutes and 31 seconds, came sixth this year in a time of 36 minutes and 53 seconds.

The first woman was Faye Sharpley, 34, from Thame, who finished in 41 minutes and 26 seconds, followed by Katy Cherry, 38, also from Thame, and Lorna White, 34, of Reading.

Dr Sharpley said: “It was a tough course but very enjoyable. I came second last year so it’s nice to improve on that!”

Other runners included lawyer Lindsay Freeman, of Reading Road, Goring, and her teenage son Alexander Darbishire,  who was taking part for the first time.

Her husband Owen Darbishire and the couple’s other children William, 11, and James, nine, were waiting for them at the finish.

Ms Freeman said: “I love this race, especially the downhill stretch at the start as it makes you feel really strong and gives you the boost you need to approach the second half.

“I’ve done it five times now and always enjoy it. I get the same time every year but that’s encouraging as you want to keep up your fitness as you get older.”

Alexander, a previous age group winner in the Hairy Legs challenge in Goring, said: “It was fun but very tiring, especially on the hill, but I was overtaking more people than were overtaking me so I’m pretty happy.”

The family’s au pair Samuel Carrero de Lamo, 25, also took part. He moved to the country from Spain nine months ago and his first race in Britain was the Henley half marathon in October.

Heidi Price, 40, of Croft Way, Woodcote, took part with her friends Rob Nethersole and Dan Gurney, of the Reading Joggers running club. She was running for the seventh consecutive year.

She said: “This was my slowest year yet but I’ve been recovering from a bad cold so it’s still an achievement to have finished.

“I love this race and always enjoy it. The hills are an absolute killer but it’s well organised and it’s very rewarding to get to the end.”

Kate Warren, 44, of Folly Green, Woodcote, ran with her friends Su Eames, 54, and Katie Bell, 32, both from Caversham, Sarah Puplett, from Reading, and Abigail Turner, from Crowmarsh.

Mrs Warren, who works in the office at the Oratory School, said: “I haven’t done it for about five years and was a bit slower this year but that’s okay as I’ve got older. It’s pretty hard but it’s a great way to start the year.”

The event raised about £2,800 to be divided between the Rotary club, which supports various causes in the area, and the Readi-
Food food bank.

Organiser Dick Hoskins said: “It was another successful year. Our surplus was slightly down on last year but the weather was perfect and everything went to plan.

“It’s always a very popular race because it’s early in the season and a little bit tougher than most, although the countryside along the way is particularly nice.

“You’ve got to be dedicated to take it on so soon after Christmas but we have a solid core of supporters who do it every year and really enjoy it.”