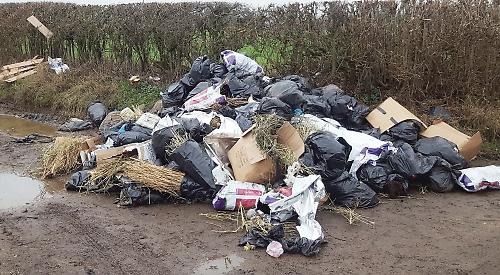 A LARGE pile of fly-tipped plants near Dunsden was reported to the police by a member of the public who suspected it came from a cannabis farm.

The debris, which was above waist height, was dumped at the end of a private access road off Kiln Lane, between Emmer Green and Binfield Heath, on either New Year’s Eve or the previous day.

It contained a large number of dried plant stems, some with leaf fragments still attached, which had been neatly baled in batches and stuffed into black bin liners.

The straw-like stems and long, multi-lobed leaves resembled those of the cannabis plant and the resident said they gave off a similar odour.

The fly-tippers also dumped a large quantity of reflective silver sheeting, which is used to grow plants indoors as cannabis farmers typically do.

There were also several empty bags of potting soil and a small water butt.

The council routinely examines fly-tipped waste in a bid to trace the culprits and prosecutes when they are successfully identified.

In March, a cannabis farmer from Swindon was ordered to pay more than £1,600 in fines and costs after the council proved he had dumped plants and growing kit in woodland at Exlade Street, near Checkendon, in April 2017.