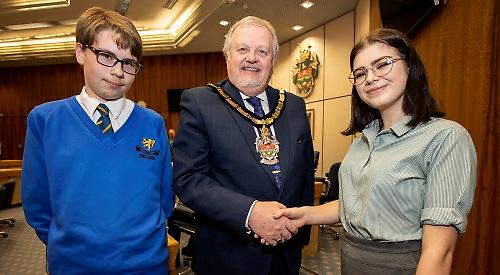 A PUPIL at Piggott School in Wargrave has been elected as a Youth MP.

The Youth MP programme is run by the British Youth Council and aims to give youngsters the opportunity to bring about social change through representation and campaigning.

Euan, who lives in Twyford with his parents Paul and Sandra, was nominated for the role by his school.

He was one of seven candidates who came together at the Wokingham Borough Council offices where each gave a three-minute speech and answered questions before voting among themselves.

Euan, who describes himself as a socialist, was chosen to serve as Vice-Youth MP to Charlotte.

Euan, a year 11 pupil, will now help organise events and projects, run campaigns and seek to influence decision-makers on issues of their choice as well as attending the annual sittings of the UK Youth Parliament.

He said: “The Youth Parliament talks directly with the Government so it’s a chance to speak to local MPs and make sure young people can tell the Government what they are interested in.”

Wokingham Mayor John Kaiser said: “This is a great opportunity for Wokingham borough’s young people to have a taste of politics and to use their voices to bring the issues that are important to them to light.

“The borough council supports this programme and we look forward to working closely with Charlotte and Euan over the next year.”