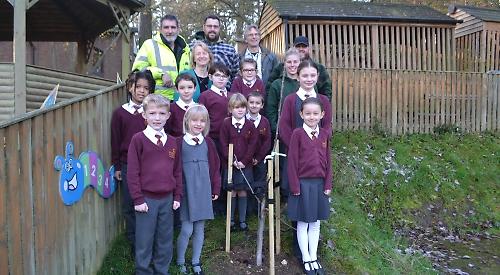 A WALNUT tree has been planted at a new outdoor learning area at a Henley primary school.

The tree was awarded to Badgemore Primary School in Hop Gardens for taking part in this year’s Henley Schools Environmental Science Competition.

Staff from Henley Town Council’s parks team planted it in the new area, which has replaced an old nursery that was demolished last year.

The school hopes to add planters and a greenhouse donated by Greys Court before it is completed by the summer.

Seven schools took part in the competition, which culminated with an awards ceremony at the River & Rowing Museum in Mill Meadows.

The joint winners were St Mary’s School in St Andrew’s Road and Sacred Heart Primary School in Greys Hill, which were awarded a trophy and a cheque for £175 each by Henley Mayor Glen Lambert.

Two teams from Rupert House School in Bell Street finished joint third and were awarded £50 each.

A voucher for a fruit tree was presented to the other schools that took part, including Badgemore and Trinity Primary School in Henley and Shiplake and Sonning Common primaries.

Competition co-ordinator Patrick Fleming, a member of environmental group Henley in Transition, said: “The standard was so good that we decided if we awarded a prize for just first, second and third place we would disappoint a lot of kids.

Badgemore headteacher Marion Arnold said: “We are delighted. This is the first bit of our new outdoor learning area which hopefully will be amazing come the summer. We are a forest school and this is adding to the forest.”