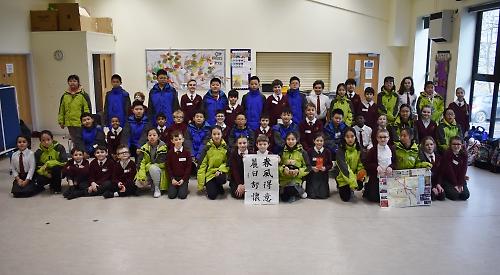 MORE than 20 children from China visited a Henley school.

The youngsters from Shaanxi Normal University spent a day at Badgemore primary in Hop Gardens as part of an eight-day trip to Britain.

They were introduced to pupils and then both sets of children spent the morning showing each other pictures of where they live and their hobbies before splitting into small teams to make structures out of dry spaghetti.

In the afternoon, some of the pupils performed shows and took part in origami and PE classes. The school was decorated with bunting which was made from a combined Chinese and Union flag.

Badgemore presented the visitors with a copy of the Henley Visitor Guide and toy bear from Asquiths in New Street, while the visitors gave the school a traditional screen print with the message “every day is good”.

Tim Hoskins, assistant headteacher at Badgemore, said: “It was a way of bringing together the two cultures. When you have groups of children in a room you don’t have to do anything, they just chat.

“The children modelled an amazing prejudice-free approach and realised that regardless of where we live or the colour of our skin or the language we speak, we are all human beings sharing one planet.

“Adults and politicians could learn a thing or two from watching these children interact. I was very proud.”