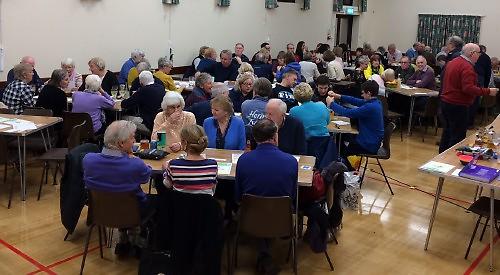 FOURTEEN teams made up of more than 100 people took part in a charity quiz night in Charvil.

The quiz featured 10 rounds of 10 questions over a range of subjects.

The winners were decided by a tiebreak question after three teams all scored 96 points.

The victors were Quiz Team Aguilera who pipped Not the B Word and Les Quizmerables after coming the closest to giving the size of the population of Scotland, which is officially estimated at 5,373,000.

A raffle raised £219 for Buscot ward, the special care baby unit at the Royal Berkshire Hospital in Reading, and Camp Mohawk, the day centre for children with learning difficulties near Wargrave.

The society has now raised a total of £800, which will be distributed to the charities.

Quizmaster Mark A’Bear said: “Village society quizzes have been running successfully for over 20 years. In many respects little has changed, with 10 sets of 10 questions, and the opportunity to play a joker to gain double points.

“The quiz is a team effort. Fellow quiz master Neil Attard and I share the question-setting. We usually meet about two months before the date and look back at the scores from previous quizzes.

“The average score per round should be seven-plus, so that every team can score well on the majority of rounds and stay within touching distance of the leaders. A few weeks before the quiz we reconvene to go through the questions and make sure that they’re not too difficult while retaining a level of challenge.

“What we’ve found through experience is that we all have preferred topics, so our own understanding of what makes a difficult or easy question is best judged by someone else.”