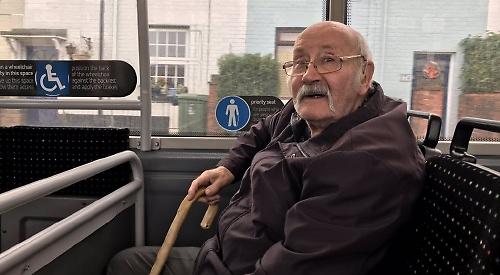 DRIVERS in Henley have been dubbed “selfish” for blocking buses by parking on double yellow lines.

There have been a number of incidents in which buses travelling through the town have been delayed by vehicles parked at the roadside, including some which were on double yellow lines or loading bays.

Stefan Gawrysiak, who is chairman of the town council’s transport strategy group, said it was an ongoing problem.

The worst affected areas were around the town hall in Market Place, Friday Street and York Road, which is an access road to Townlands Memorial Hospital.

If parked cars don’t leave enough room, the bus drivers can have trouble manoeuvring around corners and along narrow streets and sometimes have to wait for the vehicles to be moved.

Councillor Gawrysiak, who is also a member of Oxfordshire County Council, the highways authority, said: “There are issues with people inconsiderately parking in Henley.

“We have asked and will continue to ask the police to ticket cars that are parked inconsiderately because it does considerably inconvenience the buses.

“There have been times when the bus hasn’t been able to access the hospital or go down Friday Street. It’s not on and it’s purely because selfish drivers park on double yellow lines.”

One Henley man took a photograph of a bus which was delayed outside the town hall in Market Place for half an hour in December after the driver couldn’t get past parked cars.

He said the driver had told him this was a frequent experience due to vehicles being parked on double yellow lines, in loading bays and even in bus stops.

Cllr Gawrysiak said: “I was made aware of the incident at the town hall and rang an officer at the town council to go and check it out.

“By the time she went out the bus had got round but it’s an ongoing problem. People need to realise that there is a knock-on effect if they park in difficult places for a bus to get round. This applies to all buses and lorries as well. We will continue to ask the police community support officers to prioritise the parking in Henley so we can eliminate this problem.”

Last month, Barry Orton was on his way to Townlands when he was forced to get off at the end of York Road after the bus was blocked by cars.

Town councillor Donna Crook, who tweeted a picture of the incident, said: “People should be more considerate by leaving enough room for buses. They are parking there illegally. A bit more of a police presence might be good.

“This is a real bugbear of mine. I get really annoyed with people parking on the pavement so people with buggies and mobility scooters have to go on the road. It’s quite selfish.”

David Murray, a member of Henley Lions Club, photographed a car parked on double yellow lines outside the town hall earlier this month, despite traffic cones having been added in an attempt to keep the area clear.

He said: “If you ride the bus you will know that the biggest problem they have in Henley is getting past illegally parked cars.”

Dan Bassett, head of operations, said: “We occasionally experience issues such as that mentioned with our town buses.

“For the most part, the residents and visitors of Henley park considerately and sensibly, meaning our buses can get around the town on time.

“However, when we do experience such issues, the delays can be far-reaching due to the nature of the town and the service.

“Thankfully. these instances are few and far between.”

Mr Bassett added: “We work in very close conjunction with the town council to explore all options for making both the service and the routes more viable, usable and consistent so any issues are discussed with them to see if there are any easy ways to remedy these situations.

“As always, we would appeal to any car driver to park considerately, not just for our buses, but for other road users and the town in general.”