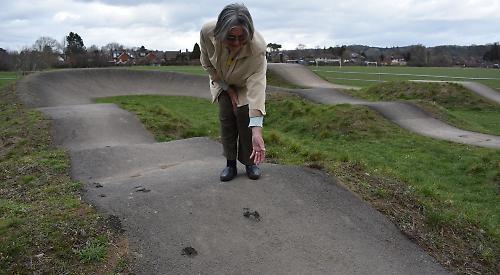 VANDALS have damaged the BMX track in Wargrave.

The track in Kings Field, off East View Road, is currently closed after a series of gashes and holes were cut into the surface.

The damage is believed to have been caused with a metal pole or similar item and has made the track unsafe to be used by youngsters on bicycles in case they hit one of the holes and fall off.

Parish councillor Marion Pope, who lives near the facility, said: “It’s a shame. There have been several children who have come past me on their bikes and I've gone out to tell them. They are so disappointed.

“The track is so well-used, not just by people in the parish but from outside. They love it.”

The gates to the track have been locked to prevent it being used while the council awaits contractors to fix the damage.

The vandalism has not been reported to the police.

Cllr Pope said: “Hopefully it will not be too long before we re-open a much-used part of our recreational equipment.

“It just seems so sad that the thoughtlessness of an individual can disrupt the enjoyment of others of all ages who use this facility. If anyone can help us with this issue the parish council would be most grateful.”

The track was resurfaced with tarmac in 2016 after it was deemed “high risk” in an inspection by the Royal Society for the Prevention of Accidents. However, this may need to be redone as another inspection last year found that the surface was wearing.

In June, users of the BMX track were urged not to misuse it. The warning was issued by the parish council after two men were seen riding around the track on motorised vehicles, which could cause damage.