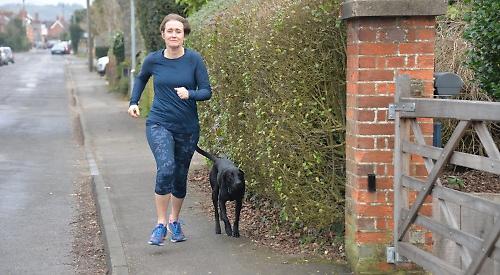 A WOMAN from Wargrave is to run in this year’s London Marathon — 14 years after she took part for the first time.

Georgina Kelly, 49, of Victoria Road, will be raising money for Nerve Tumours UK as her 15-year-old god-daughter Annabelle Ireland suffers from neurofibromatosis, a genetic disorder that causes tumours to form on nerve tissue.

Her husband Paul, a management consultant, will also be taking part in the race in April but they will not be running together as he’s doing it for the time.

Mrs Kelly, a marketing manager, also ran in aid of the charity, then known as the Neurofibromatosis Association, in 2005.

She said: “It was the year I was getting married and my husband, then fiancé, and I were going to run the marathon together but he got injured so I ended up doing it myself. This year is a big birthday for me and a big year for my god-daughter, who is not only taking her GCSEs but also having major surgery.

Annabelle, who lives in Suffolk, suffers from neurofibromatosis in her right leg, which at one stage was 8cm longer than the other.

Mrs Kelly said: “It is very heavy. She can roll over in bed at night and dislocate her leg.

“She’s having surgery with a specialist from Great Ormond Street Hospital to rectify what’s going on.

“As she’s undergoing very big surgery and it’s a big birthday year for me I thought I’d run it for her.”

Mrs Kelly gave up running after having her children, Issy, 12, and Ottie, 11, but took it up again more than a year ago.

She said: “I did the Couch to 5km last Christmas as I hadn’t run for a number of years.

“I did the Wargrave 10km in June and then decided I wanted to do the London Marathon. I was persuaded to apply for a charity place by someone saying ‘come on’!

“My husband also got a place but we are not running it together. He’s doing it for a time but I just want to get round.”

Mrs Kelly has been training over the winter, including during last month’s cold snap, when she had to run in the snow.

She said: “The icy weather was quite interesting and treacherous but I’m not injured and that’s the main thing.”

She is usually joined by the family’s black Labrador Tilly.

Mrs Kelly said: “I couldn’t do it without her. She trots alongside me and doesn’t argue. If I run with my husband he tells me to speed up and if I do it with my children they tell me to slow down!”

Mrs Kelly is to take part in a fund-raising evening ahead of the marathon.

This will be a sing-along to the film Mamma Mia: Here We Go Again which will be held at the Woodclyffe Hall on Friday, March 15 from 8pm and is open to all. There will be a licensed bar and snacks including popcorn.

Mrs Kelly said: “I’ve been to a few of these and it’s a fun evening. There will be an opportunity to dress up if people want to or they can just come along for a good time. It’s just great music and will put a smile on people’s faces.”

Tickets to the event cost £12. To book, email mammamia2.gk@
gmail.com