Artist is at home after couple replace barn with studio 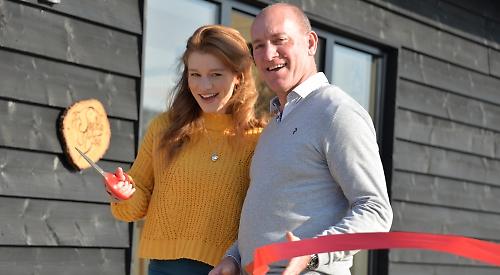 AN artists’ studio in Turville has been officially opened.

More than 60 people gathered for the ribbon cutting at Turville Studios on Saturday.

Angela and Danny Fois built the timber-clad outbuilding after being given planning permission to demolish an old barn on the site off Holloway Lane and securing a grant from the European Agricultural Fund for Rural Development. It contains six individual units which are now all occupied by artists including the couple’s daughter Sophie, who specialises in pastel pencil realism.

Mrs Fois said Sophie needed somewhere to work and was temporarily based in the tack-room at Turville Valley Stud.

She said: “We put our heads together and said, ‘why don’t we turn this old building into an art studio?’.

“Word spread quite quickly and we were inundated with people who wanted to take the studios on. We really wanted to have local people and we have chosen some lovely artists.

“We started the build in September and now we have these lovely studios. It has been a great project.”

The other artists are Jenny Zolkwer, from Fingest, Claire Ross-Masson, from Maidenhead, Rachel Wallace and Suzy Tonkinson, both from Frieth, Marie Robinson, from Benson, and Beverley Matchette-Downes, from Marlow.

Visitors are welcome to drop in to see them at work.