House that for a show! 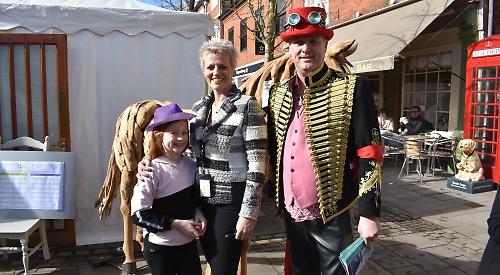 ABOUT 6,000 people attended the third Henley House and Garden Show at the weekend.

It was held in a marquee in Falaise Square as well as the town hall and had a “butterflies and bees” theme with a focus on conservation, upcycling and recycling.

Crowds flocked to the opening day of the show in the sunshine on Saturday where they were greeted by Henley DJ Gary Boys, who was dressed in an eye-catching outfit of leather trousers, old-style black and gold cavalry tunic, red top hat and goggles as he handed out programmes at the entrance to the marquee.

Thousands more people visited on Sunday despite the rain.

The marquee hosted exhibitions of furniture, lighting and kitchen products.

Companies which were represented included Mr Hobbs Gin, Henley Antiques and upholsterers A Stitch in Twine.

Many handed out food and drink including chocolate, champagne and even apples to those who stopped at their stalls.

A demonstration stage in the marquee organised by networking group the Creative Duck included displays by artists, chefs and even a life drawing session by Jo Harris, of the Henley School of Art.

They had been choreographed by Daisy Smith along with Samantha Fields and Gabrielle Clark, who also performed.

Miss Smith said: “It was something to get the energy going. It was rather nice when we were doing it and we could see all the stallholders waving their hats.”

Outside the marquee were displays of furniture and sculptures as well as a day boat called Topaz and two Lexus cars, which were available to win for a weekend in a tombola.

The town hall had smaller exhibitors offering items such as art and photography, tea towels and ceramics.

Charlotte Cavanagh of Time for Tea ran a small tea room on the stage.

Many exhibitors incorporated the theme in their stalls, with embroidered bees on display in the marquee and even versions of the insects made out of flowers.

There was a “conservation corner” with Henley in Bloom, environmental group Henley in Transition and other eco-friendly schemes, which town councillor David Eggleton manned while dressed as a cavalier. Richard Francis, founder of environmental business Sensescape, was demonstrating living walls.

Ticketed talks on interior design were held throughout the weekend.

On Saturday, a “dream home” expert panel was held in the town hall, hosted by Lizzie Hughes, of Mama Do.

Later in the day, paint and colour expert Annie Sloan gave a talk on her famous chalk paints and painting techniques. There was also a children’s bee talk by Honeys of Henley in the town hall.

On Sunday, Jay Blades, of the BBC’s Repair Shop, was in discussion with Jonty Hearnden, from Cash in the Attic, and Henley upcycling enthusiast Lynne Lambourne.

They gave an upcycling masterclass as well as answering queries from the audience about antiques and furniture restoration.

Mr Blades said: “The turnout was really impressive and shows how interested most people are in interiors and doing up their own stuff. It has had a bit of a renaissance from the Fifties.

“The show itself is tip-top. I think they should be doing it every year and everywhere should have a show like it.”

Mr Hearnden added: “Anything that generates buzz and enthusiasm in Henley is a great thing because there’s so much talent in the town.”

The proceeds from the ticketed events will go to the Chiltern Centre for disabled children in Henley.

Youngsters were able to make their own creations from the popular building bricks, including houses and rural scenes.

The show also held art and photography competitions over the weekend and the winners of a schools’ art competition had their work displayed on the staircase of the town hall.

Mrs Schäfer said: “It was absolutely amazing, I don’t think I could have asked for any more. About 4,000 people came on Saturday and another 2,000 on Sunday.

“I was really pleased with the stage demonstrations. We reduced the number of speakers and did more demonstrations instead. However, the speakers we did have were excellent and the design panel was also very good.

“The exhibitors all brought really good quality stuff and everything felt friendly and approachable. I’ve had nothing but good feedback from everybody so I’m delighted.”

Mrs Schäfer, of Walton Avenue, Henley, said the show would be held again in 2021. Fred Nickson, of Henley Antiques, said: “It was a very good and well organised show, as usual.

“I did a lot of business as I was the only one selling antiques.”

“Henley is a good place for it and I can’t wait for the next one.”

Rabea Hands, of A Stitch in Twine, said: “It was very well organised. Lots of people stopped at our stand, especially on Saturday, and we gave out nearly all our 250 business cards.

“We also had the chance to have a look around and it was really enjoyable.

“I think it’s perfect for this area, especially being in the centre where people are out even if the weather is bad.”

Artist Sarah Pye said: “It was excellent. It was very good for leads and I made sales. There was good footfall, especially on Saturday when it was rammed.

“I felt like there was a really good atmosphere with lots going on and people were genuinely interested in what was there.

“I spoke to Niki as I left and said I wouldn’t hesitate to do it again. It’s definitely the right sort of show for Henley.”