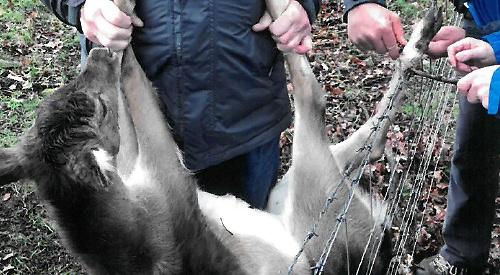 A GROUP of walkers rescued a deer caught in double-stranded barbed wire.

The Wednesday Walkers group found the stricken animal on land near Henley Park.

Mick Martin, 73, of Vicarage Road, Henley, who was one of the five walkers, said: “As we were coming down on to the Mount we heard some squealing and saw the deer hanging on the fence.

“It must have run out of the wood, tried to leap the fence and caught its feet on the top. It was hanging from its hind legs.”

The walkers approached the deer but it tried to escape, so Mr Martin grabbed hold of it and lifted it up to take the weight while two others untangled it.

He said: “We had to bring it over the fence so it twisted the wire back to the right angle. The leg came out and the deer ran away. There was nothing broken but it had a few cuts from the wire.”

Mr Martin said he didn’t see the need for two strands of barbed wire, adding: “I’m an animal lover. I’ve never been a lover of barbed wire as dogs can cut themselves.”