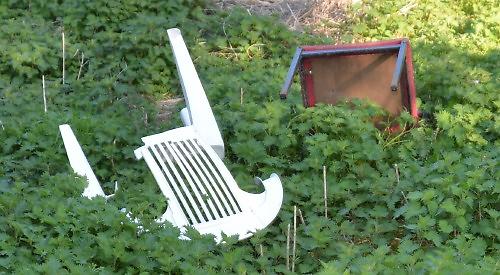 THE chairman of Henley Town Football Club has hit out at vandals who went on a wrecking spree at its ground for the second time in two months.

The culprits, believed to be teenage boys, stole about a dozen earthenware plates and glasses from a storage area near the clubhouse off Mill Lane and smashed them in and around the main stands.

Shards were scattered everywhere, including over part of the pitch and it took three hours to sweep them up to avoid any risk of players being cut.

The vandals also smashed two wooden tables and eight plastic chairs which had been donated by the Sue Ryder hospice at Nettlebed for disabled visitors to use.

They threw some of the remnants into the undergrowth between the boundary fence and the main road.

They also knocked over litter bins, upended metal tables and stole footballs from a shed to play an impromptu game before bursting one of them. The incident happened at lunchtime on Wednesday last week. It is thought the culprits got in by climbing a fence beside the public footpath near the Mill Lane car park.

The damage was discovered at about 4.30pm by groundsman Jason Hancock, who was visiting the club to mow the pitch. He called the police and club chairman John Hooper.

Mr Hancock had seen about a dozen teenage boys walking in the opposite direction as he approached the ground. Two were riding bicycles.

The same gang was seen nearby when a similar incident occurred during the February half-term holiday.

Mr Hooper said the youths were spotted loitering around the Jubilee Park pitches a few hours before last week’s attack but fled when a member of the public challenged them.

He said: “It’s disgusting because we’ve only just replaced the furniture that was damaged the last time. Sue Ryder very kindly donated it and I can’t believe it has been smashed up again.

“We’ve got an alarm on the clubhouse and I’m so glad they didn’t get in because I hate to think what they would have done.

“I just don’t understand it — what’s the point of doing something so mindless and what does anyone get out of it?

“The biggest problem was the glass, which got everywhere and took many hours to clear up.

“We’re also pretty strapped for cash so every penny is precious. We’re still trying to pay off debts left by the previous regime and this is a real kick in the teeth.

“We’re trying to make this a club for the whole community and have been working incredibly hard to build those links.

“We’ve got all local boys playing for us for the first time in years and are hosting functions like wedding receptions and wakes but we still struggle and really can’t afford this.”

Mr Hooper said he had seen the gang loitering near the ground previously and was verbally abused when he asked them to leave.

He said: “We’ve talked about putting up CCTV cameras but it probably wouldn’t make a difference to anyone that young.

“When I was their age, the police would have given them a slap round the head and taken them home to their mums but now they know no one can touch them and they just stand there baiting you.

“It always seems to happen in the school holidays. I’m sure they’d claim they’re bored and there’s nothing to do but if you give them facilities or things to get involved in they never use them.”

Mr Hancock said: “I wish some parents knew what their children really get up to when they say they’re ‘just going off to the river’ for a few hours.”