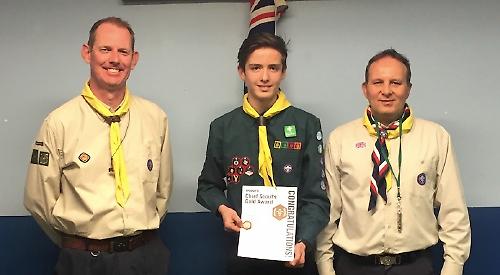 A SCOUT from Wargrave has been received the organisation’s highest award.

Matthew Savin, 14, was presented with the chief scout’s gold award by Geoff Barnes, the district commissioner for Loddon Scouts, at a meeting of 1st Wargrave Scouts.

Matthew, who lives in Wargrave and attends the Piggott School, has been a member of the group since 2015,

He has also taken part in trips and events including the Great Breakfast Chase, an overnight hike.

Scout leader Pete Fry said: “This is the highest award in scouting and represents a significant personal achievement. Over the last four years Matthew has diligently attended nearly every Monday evening session and has attended a number of camps and hikes.

“It’s a lot of hard work and the leaders are very proud of Matthew’s efforts and the contribution he has made to the troop — a job well done.”

Fellow leader Pete Walsh added: “Matthew is one of only ten scouts to achieve this award in recent years at 1st Wargrave.

“Last year, we awarded four of these, including one to the first girl from the village ever to achieve gold.

“We wish Matthew well in whatever he does next and we thank him for his contribution to the troop.”

The group is seeking new volunteers and trustees. Anyone interested should email gsl@wargravescouts.org