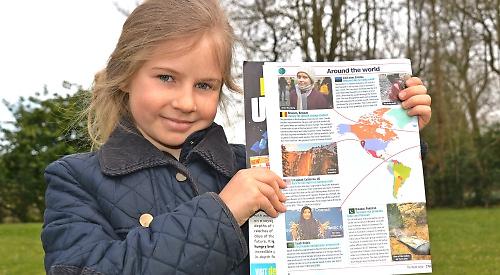 AN internet troll told a mother she was abusing her daughter for allowing her to stage climate protests.

Katherine Gubbins, who lives in Shiplake, says the troll targeted her when she revealed her daughter Grace, 10, had planned a protest in Henley.

Mrs Gubbins advertised the protest on an online networking group, so that others could take part.

She was then emailed and told she was guilty of child abuse and ought to be prosecuted because climate change is “man-made” and a “political agenda designed to cripple our economy”.

Mrs Gubbins said: “I think it is appalling. It annoys me that he had time to do this like that.

“It is just silly and small-minded. You can absolutely disagree with what Grace is doing, but it’s not called for.

“That was the only negative response. Everyone is entitled to their opinions. I just couldn’t believe it actually. I thought it was spam.”

Mrs Gubbins believes more should be done to tackle abusive online trolls and they should be given three chances to reform their behaviour before they are banned from social media and other messaging services.

She also says revealing the identity of trolls could limit abuse online.

Mrs Gubbins said: “I do not necessarily think that things need to be taken further, but I do think that if it is continued then something should be done.

“They should be fined — not monetarily but blocked from using X, Y or Z websites until they can learn to behave properly.

“We all live in society and we all have these unspecified rules about how we behave to each other. Being horrible to one another doesn’t help anyone.

“I think whoever he is, he is hiding behind his keyboard. You can just hide and say whatever you like. Stand up, man up and have the conversation. Do not hide and call me horrible things when you have no idea.

“I am quite happy to debate the issue. I may be wrong and he might be wrong. You can have a good debate on quite a lot of issues quite openly.”

Mrs Gubbins says she is proud of her daughter for standing up for what she believes in and intends to continue supporting her protesting.

She said: “I am really proud. She is only 10. It’s fantastic that she really wants to do this. Life is all about taking opportunities and about doing things, and you do not want to get to the end of life and think ‘what if?’

“People are going to come and help and support us because of this and have said that my daughter is doing a really good thing.”

She had made a 6ft banner for the occasion, which read “Climate kids are coming! Change behaviour now” and was coloured in shades of green and blue.

The protest coincided with a worldwide “climate strike” in which children walked out of school to encourage governments to take action against global warming.

Mrs Gubbins said: “We did not have that many people last time, but you have to learn that activism starts somewhere and you might not get lots in the beginning.”

She added: “From small starts, bigger things grow. We will see how many people come.”

She said Badgemore Primary’s Forest School, in Hop Gardens, Henley, had invited Grace to speak to the pupils and that a representative would support her at the next protest.

Mrs Gubbins also said her daughter’s education was more important than protesting and that it was up to parents to choose if they wanted their children to take part in the protest.

Her next protest will take place in Market Place on May 24 by the town hall from noon to 1pm and anyone can come along to support her.

She read about Greta in The Week Junior, a current affairs magazine for children, and also watched videos on the topic as part of her school’s “healthy planet, healthy me” syllabus. She wants to make a difference as she is worried for the planet’s future if global temperatures keep rising.

Before moving to Henley with her mother and eight-year-old sister Georgina in late 2017, the family lived in Switzerland and visited the Aletsch Glacier, which is receding by 12m every year.

They returned in February and witnessed the aftermath of the Crans-Montana avalanche, which killed a skier. The cause is still being investigated but melting snow is thought to be a factor.