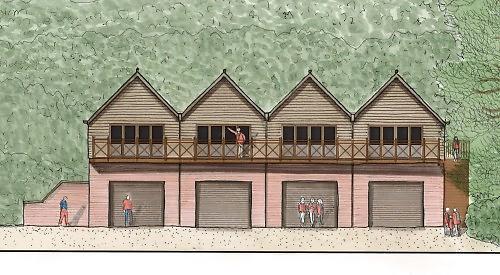 THE outgoing headmaster of Shiplake College was moved to tears when he learned that its new £2.2million multi-activity centre is to be named after him.

Gregg Davies found out during a groundbreaking ceremony to mark the college’s 60th birthday which was attended by former pupils and Olympic rowers Will Satch, Richard Lester, Ben Hunt-Davis and Malcolm Carmichael.

He was visibly shocked and became emotional when he pulled back the curtains on the centre’s foundation stone and saw his name engraved on it.

The surprise was organised by four governors including Tim Eggar, the chairman, and kept a secret.

More than 30 people, including governors, students and staff, attended the event at the college, which included a drinks reception.

Mr Davies, who was appointed in 2004, said: “I’m an emotional wreck and still in shock to be quite honest. I never thought that would happen. People said, ‘You must have had an idea’ but I genuinely didn’t.

“So many fabulous people from Shiplake have been associated with rowing over the last 60 years. I am just so honoured.”

The Davies Centre, which should be built in the next nine months, will be located by the River Thames on the site of the old boathouse.

It will provide training facilities for the independent school’s rowing crew and storage for 72 boats. It will also be a hub for the school’s combined cadet force and will feature a climbing wall, fitness suite and rifle and archery range.

There will be changing facilities and toilets and a balcony accessed from the ergo training area that will double as a function room.

Mr Davies said the recent successes of his pupils and their coaches Dave Currie and Hugh Mackworth-Praed had convinced governors to invest in the facility.

The college won the Schools Head of the River race this year and in 2017 and came second last year.

Its under-16 rowers won the 2018 National Schools Regatta at Dorney Lake and earlier this month five sixth-formers rowed for Great Britain at the International DRV Regatta in Munich.

Mr Davies said: “This is a significant financial investment and it is because of the coaches that the pupils are achieving.

“We decided about 10 years ago that we would try to make Shiplake a force to be reckoned with in schoolboy rowing. We have worked hard and have been saving up for this. It is time for us and I can’t wait for it to be finished.

“We could have spent the money on something else and in the past we chose not to build this. We have built a girls’ house and thinking space but we weren’t ready for this.

“I’m very proud to have it named after me but the real joy is to see the result of the hard work of the coaches and pupils. We can’t comprehend how much time and effort they put in.

“We are very proud of our rowing Olympians. I was able to have a really good conversation with them at lunch.

“They were really generous with their time for the pupils. All of them know Will Satch. He regularly comes down here to look at our first eight and the other Olympians are also coming to have a look.”

Mr Currie, the college’s director of rowing, said: “Our boat club is in a very strong place and we’re doing a lot of things right now. This centre will hopefully push us that extra little bit.

“It will be really nice for the kids to have a facility they can be proud of as beforehand it was just old, dirty sheds down here.

“It will have a nice community feel to have the other activities here as well. I’m really excited.”

He said: “This will be absolutely fantastic and a great asset of the school, which has an important part to play nationally. This is where I learnt to row and I really enjoyed my time here but the facilities you need are very different now.”

He said: “Boathouses are great to have, but the boats are the key thing. It will be a great asset.

“Since my time here we have transformed the whole site. When I was a pupil there was hardly anything at all. The sport of rowing has moved on an awful lot and so has Shiplake.”

He said: “When I came, there was just one small shed. I had never rowed before as I was asthmatic so I was sent down to the river and I spent as much time on the water as I could. Shiplake taught me everything.”

He said: Shiplake helped me massively. I came here on a rugby scholarship and found it extremely therapeutic — it helped me study, work and gave me edge. I absolutely loved it.”

Mr Davies will step down at the end of this academic year to become education director for Bellevue Education, which owns 19 independent schools.

He will be succeeded by Tyrone Howe, who is moving from Uppingham School in Rutland.