All the fun of the circus at May fayre 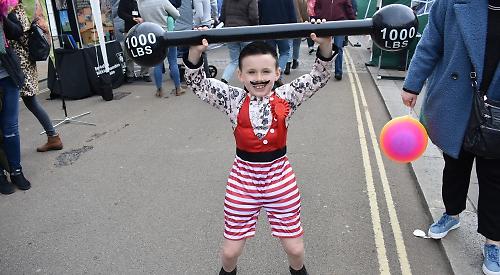 THOUSANDS of people packed the streets of Henley for the town’s May fayre on bank holiday Monday.

The event was held in Market Place for the third year running and was opened at noon by Mayor Glen Lambert and town councillor Stefan Gawrysiak.

The attractions included fairground rides, dozens of games, live music and performances, a display of Morris dancing on a stage outside the town hall and a fancy dress competition.

Businesses and community groups and charities had stalls selling food and drink, clothes and jewellery. These included the Henley Lions Club, the RNLI and Royal British Legion.

There was also a small Ferris wheel for children and fairground games including hook-a-duck and a coconut shy as well as face-painting.

The fayre culminated with a tug-of-war competition.

A boy dressed as a circus strongman was crowned the May King for the third year running in the fancy dress contest.

Ethan Procter, of Singers Close, was one of six children who took part.

The nine-year-old, who goes to Trinity Primary School, won last year dressed as an old-fashioned gangster and the year before as Newt Scamander from the film Fantastic Beasts and Where to Find Them.

This time, he wore a padded outfit which made him look like he had bulging muscles and tattoos, red-striped shorts and a waistcoat plus a fake mustache. He pumped his fist as he was announced as the winner by town councillor David Eggleton, who had asked each entrant to give their name and perform a short routine associated with their costume.

Ethan said: “This is my favourite outfit. We started toying around with ideas and came up with the strongman. I sprayed my hair black for it — it’s usually blonde. I’m really happy to have won three times in a row.”

The May Queen was six-year-old Delphi Green, who dressed as a clown in a rainbow onesie, pigtails and fluffy antennae.

Delphi lives in Reading but her father James Irwin lives in Henley.

She said: “I wanted to be an acrobat but then decided to come as a clown because it was too cold! I wasn’t expecting to win so I’m very happy.”

The two winners received rosettes and tickets to the Kenton Theatre pantomime and the Little Welly children’s assault course event.

The other entrants, who were dressed as acrobats, circus masters and a parrot, were also presented with rosettes.

The tug-of-war contest was won by firefighters from Henley fire station. They beat the reigning champions, a side from the Row Barge pub in West Street, in a sudden-death pull-off.

Both teams had won their best-of-three semi-finals against sides from the Argyll and Saracen’s Head pubs.

The Row Barge team looked set to make it four wins in a row as they won the first tug in the final but the eight firefighters won the second pull before taking victory to rapturous cheers from hundreds of onlookers in the final bout. They cheered and hugged each other before being congratulated by their rivals.

The fayre, which was moved from Mill Meadows in 2017 after suffering falling attendances, began with a Maypole dance by children from Steph’s Divas & Dudes dance academy, choreographed by dance teacher Anne Garrett.

The dancers created patterns with the ribbons on the pole as they were watched by dozens of parents and visitors.

Bezerkaz Circus performers on stilts paraded around Market Place during the afternoon and there was a circus skills workshop for children.There was music on the stage throughout the afternoon thanks to singer Daisy-Willow, the choir from Rupert House School and members of the Rock Choir, who sang songs including Africa by Toto, Roar by Katy Perry and Yazoo’s Only You.

Children could play on pedal-powered toys in an area near the town hall which had been cordoned off with hay bales, while a fire engine was parked on the square for youngsters to look around. Other activities included pottery painting and balloon animals, while Victoria Ruskin, of Enchanted Players Theatre Company, dressed as a fairy and blew bubbles.

Organiser and town councillor Sarah Miller said: “I’m really pleased with the amount of people who turned up and really happy that it didn’t rain. There were so many families and so many children. We had a really good selection of acts on the stage and a good selection of stalls with local charities. I think we ticked all the boxes and everyone enjoyed the day.

“It was very busy and that was constant, which was what I liked. We had the tug-of-war at the end of the day so that more people would stick around. A lot of people love that event and at the end there were still hundreds of people there, which was great.

“A big thank-you to David Eggleton, who helped a lot, and Stefan Gawrysiak, who could be heard in Caversham! Once he’s on the microphone you can’t get him off it!

“We were raising money for the Henley Stroke Club and they had a fantastic day and went away with buckets full of money.”

Cllr Miller said the fayre would remain in the town centre for the foreseeable future.

She said: “I think it needs to be in the town centre. The whole reason I moved it was because that’s how I remember it when I was a kid and it’s about everybody benefiting, including local businesses. Unless it outgrows the town centre I’d like to keep it where it should be.”