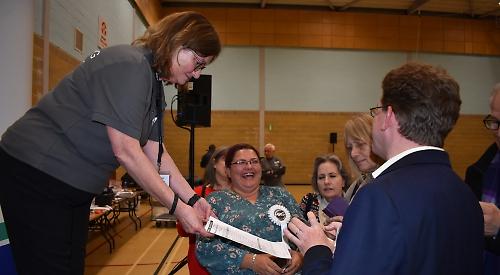 HENLEY Residents Group has strengthened its grip on the town council after achieving a record-equalling result at last week’s elections.

All 12 of its candidates were elected, while the opposition Conservatives won just three seats and lost four.

The remaining seat went to the former Conservative mayor Lorraine Hillier, who was not standing for a party.

HRG also won all three Henley seats on South Oxfordshire District Council, having previously held only one, in the elections on Thursday last week.

The group put its success down to voters’ feelings about Brexit and other national issues but mostly its own record locally.

Ian Reissmann, who was
re-elected in Henley South ward, said: “It was fairly obvious as we knocked on doors as a local independent party that we were in a good place and national parties were rather less popular.

“We also think people are happy to talk about local issues and we are happy with the way we have been managing the town in recent years.

“I think the local factor was the dominant one. People wanted to talk about local issues like traffic, schools funding, playgrounds and other things we do on a day-to-day basis.

“Only a handful of people wanted to talk about national issues and we talked to them about local issues on the basis that we are not a national party and don’t think national politics affects what we do.”

HRG says it will focus on tackling Henley’s transport problems, including parking and air pollution, and helping to provide affordable housing.

Cllr Reissmann said: “A lot of people talked about traffic and parking and it’s fairly obvious that it does affect people.

“We will be looking to continue the work we have been doing on the transport strategy group of the council.

“We have also been looking at what we can do to improve the availability of low-cost housing and the infrastructure needed to support that.

“These are clearly things people are concerned about and have asked us to deal with.”

HRG now has six councillors in both the Henley South and Henley North wards. About 10,000 votes were cast in each ward and all 12 HRG councillors received more votes than their Conservative opponents with nine of them receiving more than 1,000 votes.

The Conservative candidates to be elected included sitting councillors Will Hamilton and Laurence Plant in South ward and newcomer Ian Clark in North ward.

In North ward, Councillor Gawrysiak received the most votes with 1,149 (11 per cent), narrowly beating Councillor Arlett with 1,100.

There were cheers and hugs from HRG councillors and supporters as the results were announced at the count at the White Horse leisure centre in Abingdon on Friday.

Many of the HRG councillors at the event wore rosettes in the party’s colours of black and white.

There were smiles and laughter as returning officer Margaret Reed showed them the results ahead of her official announcement and the candidates crowded round for photographs.

None of the Tory candidates was present, but outgoing group leader Julian Brookes was there.

Cllr Reissmann said: “We are very happy that the electorate has given us such a strong vote of confidence and we are looking forward to putting our promises in to reality over the next four years.

“We want to say thanks to the residents for placing their trust in us. We will be working hard over the next four years to make sure we deliver on our promises and will continue working with residents to do what they would like us to do.”

Cllr Gawrysiak, who was also re-elected to the district council, said: “I’m extremely pleased. We worked hard on this campaign and I think the residents of Henley have said that HRG does a lot of good work for the town and so they have rewarded us. We will continue to work hard for the next four years.”

Cllr Hinton, who is now also a district councillor, said: “I’m extremely proud to be doing a third term as a councillor.

“It’s great to have support and we will pay back that support over the next four years. It’s going to be a little bit harder after my election to the district council but that’s going to be a new challenge.”

She added: “There were some really good Conservative candidates so hopefully they will stay involved despite not being elected.”

Cllr Lambert said: “I’m just very grateful to everybody who voted for me. They came out in their thousands. It caps off an amazing year.

“It’s great to have a really good, strong position with people working on the council for the good of everybody.”

Councillor Eggleton said: “I’d like to say a big thank-you to the people for putting me back in. I will carry on delivering their wishes and being their voice.

“It’s such a good feeling that we are all here together to carry on supporting the people of Henley.”

Councillor Crook, who was elected as a Conservative in a by-election in January last year but left the party in November before opting to run for HRG in March, said: “I’m really chuffed and glad everyone got through, especially Lorraine. I’m very happy and looking forward to the next four years.”

Councillor Hooper, who is chairman of Henley Town Football Club, said: “Thank you to everybody who voted for me. I would have been a bit surprised if I hadn’t been elected because of my connections with Henley, especially the football club.

“I just want to serve Henley the best I can, that’s all I can do.”

HRG leader Gill Dodds, a former mayor, said: “I wasn’t surprised because I’ve been knocking on doors and talking to people and picked up a huge amount of support in the town.

“We were just concerned that people wouldn’t turn out and vote but you can see from the numbers that they did. I’m really pleased and just want more of the same. I’m really proud of the candidates and the people of Henley for supporting us. Who would have thought when we formed HRG 30 years ago that we would be here now? It’s quite wonderful.”

Councillor Hillier, who has sat as an independent town councillor since she left the Conservative group in 2017, said voters’ concerns over issues such as Brexit must have helped her.

She said: “I didn’t know the depth of feeling but if there was ever a good time to stand as an independent this was it.

“I’m happy to work with anybody. For the last couple of years I’ve been an independent on the town council and just voted as I thought best. I’ve very often voted with the Conservatives and the same with HRG.

“We’ve all got the same interests, we want the best for our town and it doesn’t matter what party you are at town level.”

Cllr Hillier stood for the Tories on the district council, which he has chaired for the past year, and was elected in the Woodcote and Rotherfield ward.

Councillor Hamilton said: “It was a disappointing result but I’m one of the few Conservative candidates to be re-elected and therefore I will continue to do what I can for the town to ensure the benefits are the best they can be.

“It is disappointing what has happened with Brexit. It was principally a matter of ‘you haven’t delivered Brexit’. That’s what this election was about.”

He said it was now a time for “unity and compromise”, adding: “It’s a case of carrying on doing what feels right and what’s positive for the town.

Councillor Clark said: “I feel happy but then I feel disappointed because of the other [Conservative] candidates who didn’t get in.

“I want to work for Henley. I’ve lived and worked here all my life and I love my town. I’m hoping to get things done. I was in the public gallery before but now I’m a councillor and hopefully they might listen. My aim is to serve the people of the town and listen to what they want and do it.

“We’re here to serve the community so let’s all work together.”

Mr Brookes, who had served for four years including a term as mayor, said: “Our number of votes was about half of where they were in 2015, which to me says our electorate basically stayed at home and didn’t come to the polling station.

“Brexit clearly was an issue on the doorstep and it feels like a protest vote. It is worse than I expected.

“We’d be utterly complacent to think there isn’t something we couldn’t have done better. We need to sit down and go through what we did in the campaign.

“There will be another election in four years. We have to move on and get ready to fight that

Daniel Bausor, who became chairman of the Henley Conservatives in September, said: “We fought a great campaign to revitalise Henley and we had a very strong group of candidates, with a really diverse background, but obviously we were affected by the national situation with Brexit, which we understand.

“It is hugely disappointing that a national issue has affected the local situation but we have to listen to the electorate.”

Henley Conservative MP John Howell said: “The principle thing that affected the town council election was the reaction to national issues of which Brexit was the major one.

“I feel absolutely exhausted and devastated by the continuation of the Brexit saga. It is an extreme group within the Conservative party who have kept us going on this.

“I've endeavoured to move us on quickly to the important document which is the political declaration. I don’t think this is the end of the Henley Conservatives at all.

“We have to work hard in order to win these elections the next time around but this is not going to be achieved without delivering Brexit.”

HRG’s success equals its best ever result in 2003 when all 12 of its candidates were elected to also seize control of the council from the Conservatives.