Tough? It muddy well was 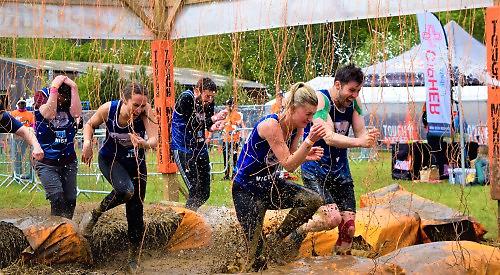 A MAN from Henley raised more than £3,000 for mental health charity Mind when he took part in the Tough Mudder challenge.

Ed Hopkins led a team from Brands2Life, the PR company he works for in London, at the sixth annual obstacle event, which was held on the Culden Faw Estate.

Mr Hopkins, who grew up in Wyndale Close and attended The Henley College, was taking part in memory of school friend Chris Seal, who died in 2017 after suffering from mental health problems.

Mr Hopkins said: “For all six of us, Mind is particularly close to our hearts as a few of us have lost people near to us to us due to mental health.

“Chris was one of my best mates and a wonderful guy. I’ve done a bit of fund-raising for Mind in the past in his memory.

“Tough Mudder is great for fund-raising because it’s so challenging. Some of the obstacles are brutal and that means people are more likely to donate.”

The team took on 25 obstacles including the Mudderhorn, a 25ft-tall netted obstacle, the Block Ness Monster, where runners have to jump into water before clambering over rotating blocks, and Arctic Enema, where they are plunged into a pool filled with icy water.

New obstacles for this year included Spread Eagle, where competitors had to climb on all-fours on slacklines suspended over water, and Tight Squeeze, where they ducked under a pipe just inches above the ground.

Mr Hopkins, who took part in another Tough Mudder event in Sussex last year, said: “I really wanted to do my home town one. Having done one before helped and my team-mates relied on me to help them through. We did the full 10-mile course. It’s a test of your grit and the teamwork element was so good.

“It was a great course, really beautiful, and the obstacles were really challenging. We all made it through and I got round without falling. I’d done a lot of work in the gym so I’m pleased the training paid off.”

The group were among thousands to take part in the event.

Runners followed one of two routes around the estate near Hambleden while tackling a variety of obstacles that tested their strength, stamina and pain resistance. The course finished with the popular Electroshock Therapy, where challengers had to run through a corridor of live electrical cables that would shock them upon contact.

The obstacle had hay bales for competitors to climb over and was also watered frequently to make it muddy, with several runners losing their shoes and having to crawl back in to retrieve them.

Some participants stayed at the site to enjoy entertainment including food and drink stalls, music and games.

Lots of people were taking part in teams, often for charity. They included groups running for the MS Society, the Aanandit Charity Centre in Nepal and CMV Action.

Mr Hopkins’ team has so far raised almost £3,200 for Mind, which includes £1,000 donated by the founders of Brands2Life.

• A second obstacle course for children ran alongside this year’s Tough Mudder. Lidl Mudder, a one-mile mud-fest for five- to 12-year-olds, featured different challenges to the adult course, including a “mini-Everest”.