Girl, 9, has haircut to raise money for cancer sufferer 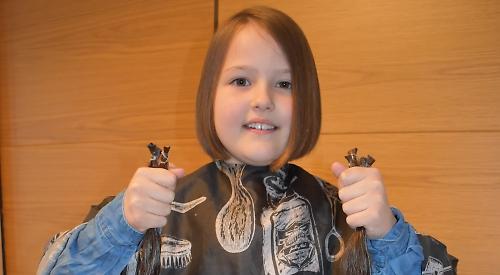 A GIRL raised more than £420 for a man suffering from a rare type of cancer by having 12in of her hair cut off.

Lilia Taylor, nine, decided to help after hearing about Nick Dipper, who needs to raise £140,000 to pay for pioneering treatment in Germany which is not available to him on the NHS.

Lilia lives in Western Avenue, Henley, with her parents Andy and Emma and brother Gabriel. Her mother knows Mr Dipper’s wife Lisa through Highmoor Pre-School, which Gabriel attended with the Dippers’ twins Ely and Ezra.

Mrs Taylor said: “When we heard about Nick’s diagnosis we wanted to do something. I’d made a donation anyway and then Lilia came up with the idea of having her hair cut.

“She was really up for it but I was a bit wobbly — she’s been growing her hair since she was born!”

She tied the girl’s hair in six ponytails before cutting them off and giving her a bob.

Lilia, who goes to Stoke Row Primary School, chose to have her hair sent to the Little Princess Trust, which makes wigs for young people suffering from hair loss.

She is also running an online fund-raising page where people can donate, with the money going to the Dippers’ appeal. Lilia, who covered her mouth with her hands in excitement after she saw the finished look, said: “I feel very different but I love it!”

Mrs Taylor said: “I’ll get used to it. I’m very proud of her and the fact that she collected more than £300, it’s a bit of a boost for Lisa.”

Mrs Dipper said: “She’s our youngest fund-raiser so far and it’s quite touching when a little person does something to get involved.

“She might not know the whole story but I know she’s aware of the situation and it was her choice to do it. I think it’s sweet, so well done.”

Mr Dipper hopes to undergo treatment which will help his body’s immune system recognise and attack cancer cells. He has had a series of injections at the Spire Dunedin Hospital in Reading and had a second round of treatment in Germany last week.

Mrs Dipper said: “We don’t know anything yet because it’s too early but the chat with the oncologist was very promising.

“He was using the word ‘remission’ in conversation with Nick. That positivity is keeping us going — he keeps giving us hope.”

An online appeal has so far raised more than £80,000, while readers of the Henley Standard have donated more than £2,200 in cash and cheques. Other supporters are running fund-raisers, including bake sales and charity events.

At the weekend, family friend Ricky Zamir drove a convertible Peugeot from Birmingham to Benidorm to raise funds.

Mrs Dipper said: “Fund-raising is going really well. We did something as simple as a car boot sale and raised £713, which was amazing.”

She said her husband had been lifted by the treatment starting.

She said: “To see the difference in Nick when he goes to Germany is unbelievable. It’s worth the money alone to hear the tone of his voice.

“I didn’t go with him as we are trying to keep costs down but I rang him one morning and asked how he was and he said, ‘fabulous’.

“It has given him that spark back and you can’t put a price on that.”

You can donate by sending cash or a cheque to the Henley Standard offices at 1 Station Road, Henley, RG9 1AD or online as follows: