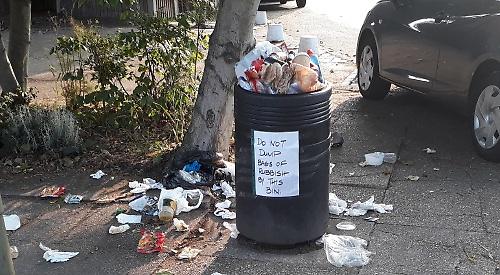 RESIDENTS of Henley who dump household waste in public bins are showing a lack of respect, says the Deputy Mayor.

David Eggleton says bins are regularly overflowing with waste, which spills on to the pavement and makes the town look messy.

In some cases, when a bin is already full, residents have left bags beside them so they can be easily ripped open by rats or foxes.

At 7am on Monday, the bin on the pavement close to the junction of Reading Road and Upton Close was full and rubbish was strewn around it.

Ironically, someone had affixed a handwritten sign to the front of the bin, saying: “Do not dump bags of rubbish by this bin”.

Councillor Eggleton has sent pictures of the rubbish to Biffa, South Oxfordshire District Council’s waste contractor, and said offenders should be punished.

He said: “Someone needs to be prosecuted to make it stop.

“People need to show some respect because public bins are not for household waste. The bins on the highway are emptied by Biffa and it is in their contract to only empty the bins and not clean the area around them. They could refuse to do it.”

In 2017, the district council placed stickers on litter bins in Henley to warn people that it is illegal to dump household waste in them.

The bins should only be used for litter such as food and drink packaging.

Anyone convicted of fly-tipping could be fined up to £2,500.