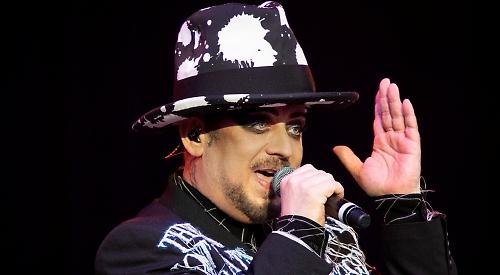 BOY George had the whole crowd on their feet as he opened the 38th annual Henley Festival last night (Wednesday).

Before the performance they enjoyed food and drinks on the riverside lawns, while some visitors moored to the bank on boats and enjoyed picnics.

Artwork and sculptures were on display as well as the usual roaming troupe of entertainers which included a herd of mechanical creatures, Stilt Strings - three women on stilts playing instruments - and Ocho the Octopus, a giant inflatable octopus puppet with eight fully articulated legs.

Boy George took to the "floating stage" dressed in black trousers, a black jacket decorated with white threads and lettering, and a black and white hat at about 8.50pm for a set lasting 90 minutes.

The Culture Club frontman asked the crowd: “Are you ready to have fun? What a lovely place, you look lovely.”

He opened with a cover of David Bowie and Iggy Pop’s Funtime and then New York Woman before performing a cover of Bowie’s The Jean Genie.

He was accompanied by a five-piece band and two backing singer and danced on stage and even shook hands with several members of the audience.

The 58-year-old then sang Cheapness & Beauty followed by It’s a Miracle.

Next up was his UK number one hit Everything I Own, to which the crowd sang along, and a medley of Bigger Than War, The Rolling Stones’ You Can’t Always Get What You Want and Lou Reed’s Walk on the Wildside.

This was followed by Culture Club’s Let Somebody Love You, their hit Time (Clock of the Heart) and Runaway Train.

He then launched into Do You Really Want to Hurt Me? as several people danced in the aisles.

This was followed by the group’s biggest hit, Karma Chameleon, and T-Rex’s Telegram Sam.

He closed the show with Life, the title track of Culture Club’s sixth studio album, released last year, and a cover of Get It On, also by T-Rex.

The traditional fireworks show at the end of each night followed.

Jessie J will perform on the “floating stage” tonight (Thursday).