Hat’s the way to do it! Boy George more than had it covered 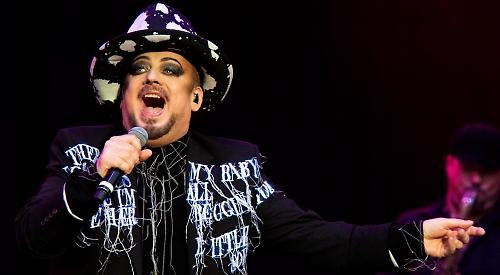 HE was one of the biggest and most distinctive stars of the New Romantic era of the early Eighties.

Talent-spotted by Sex Pistols svengali Malcolm McLaren for his androgynous style of dress, his appearance caused genuine confusion when he first appeared on Top of the Pops.

Three decades on, the “Is Boy George a man or a woman?” debate that briefly flared in the pages of Smash Hits seems even more quaint than it would have done before the rise of the transgender movement.

As the singer himself later remarked: “The clue was in the name.”

It may have flown under your radar, but 2014 saw Culture Club reform and embark on a world tour that produced an accompanying live album.

The band also went back into the studio and recorded 18 new tracks for a new album that was going to be called Tribes. But when it appeared last year it had been retitled Life and was credited to “Boy George and Culture Club”.

Ah well, such is life. Regardless, the album garnered some very good reviews — and judging by George’s showing here in Henley it was not hard to see why.

The man is still every inch a star. In his trademark two-tone top hat and patterned jacket he was living proof that you can never be overdressed at the Henley Festival.

Backed by five musicians and two backing singers (one male, one female, natch) he was loud and proud from the off — powering straight out of the blocks in a manner that would have impressed Usain Bolt.

If some of today’s performers like to wear their hearts on their sleeves, the Boy likes to wear his influences on his.

Opening track Funtime was a David Bowie/Iggy Pop number that served as the lead track on George’s 1995 album Cheapness and Beauty and was hailed by critics as “a screaming guitar rock version”. Here it was a percussive, powerful and utterly compelling start to proceedings.

A cover of Yoko Ono’s New York Woman followed before Bowie’s The Jean Genie brought the audience to their feet. (Those that weren’t already on their feet, that is!)

A smorgasbord of imagined Americana, the track reminded us how much of his career George has spent across the pond.

While he’ll always be most famous as a pop star, he has also carved out parallel careers as a DJ, author, clothes designer and photographer.

In 2015 his contribution to British music was recognised with an Ivor Novello award — and who could begrudge him that?

Certainly not this crowd, who roared their delighted approval at the opening bars of It’s a Miracle — the first Culture Club number of the night, but not the last.

With eight people on stage, there was twice the number we would have had at a Culture Club gig, so it was certainly value for money.

When George went solo in the mid-Eighties, he did so in style — hitting number one with a sweet reggae-inflected cover of Bread’s Everything I Own.

Here in Henley, with the audience singing along throughout, the song was a reminder that George’s voice has lost nothing of its blue-eyed resonance. “So smooth!” was how one friend who really knows his music put it.

This was a set studded with cover versions, but the Boy made each one his own.

The highlights for me were a soulful take on the Rolling Stones classic You Can’t Always Get What You Want, followed by an instantly recognisable Walk on the Wild Side with the late Lou Reed. As you may imagine, the backing singers really came into their own here.

As we neared the end of the set, Soul Asylum’s Runaway Train was another peak, but two of the biggest numbers were still to come.

The crowd were already up on their feet, but 1982 hit Do You Really Want to Hurt Me? had them dancing in the aisles.

Wasting none of the momentum he had built up, George launched straight into Karma Chameleon — probably as good a description of its writer as you will find.

A child at the time, I remember Karma Chameleon being at number one for weeks. One of my friends from junior school had a transistor radio it was playing on and we almost — almost — danced in the street.

There was no such restraint here, and quite right too.

Encores Life and a spanking version of T. Rex’s Get It On closed the show, with George thanking his band individually in traditional “School of Rock” style at the end.

The other headliners are going to have their work cut out after this.