Odell dances in the aisles with festival fans 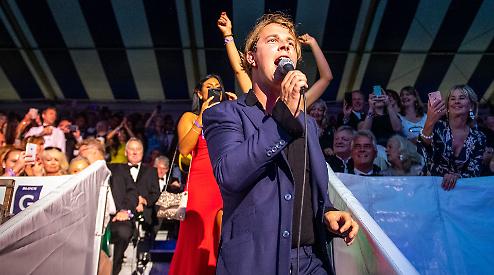 TOM Odell danced on his piano when he performed on the third night of the Henley Festival.

The singer-songwriter launched into his set with his 2013 single I Know following a 20-minute delay getting to the stage.

He then called on the crowd to stand up, which drew loud cheers, before going straight in the next songs, Sparrow and Still Getting Used To Being On My Own.

Odell told the crowd: “How are you doing, Henley Festival? You feeling good tonight? I must say you are all looking very, very beautiful.”

He introduced his backing band, comprising a guitar player, bassist and drummer, and each played a solo before the group performed Half As Good As You and Heal.

The crowd started dancing in the aisles when Odell sang Go Tell Her Now.

Before the penultimate song Another Love, he said: “Ladies and gentlemen of Henley - if you do one thing for me this evening, when we come back in and I go 'one, two, three, four', I want you to dance like f***ing animals, alright?”

People sang, danced and waved their arms when the band closed the night with a rendition of Billy Joel's Piano Man, which was followed by a standing ovation and fireworks.