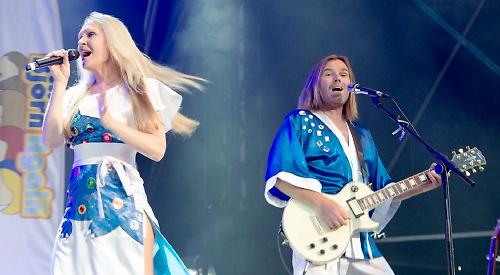 THE Prime Minister was among the guests at Saturday's sold-out Henley Festival performance by Björn Again.

Theresa May was seen dancing in the aisles of the grandstand with a group of friends as the tongue-in-cheek Abba tribute act played 20 of the Swedish supergroup's hits.

The band, which has been touring since the late Eighties, stepped out dressed as their namesakes with “Benny” and “Björn” wearing loose silk tops embroidered with their names and “Anni-Frid” and “Agnetha” in white gowns and matching knee-high boots.

Their set opened with Waterloo, Gimme Gimme Gimme and Super Trouper, then both the group and the audience were split into two sides and challenged to sing the chorus of Honey Honey as loudly as possible.

Anni-Frid claimed her side had sung the loudest and Björn responded: “Maybe, but I think we've got the sexiest side over here!”

After a quiet interlude featuring The Name Of The Game, I Had A Dream and Chiquitita, the women left the stage while Benny and Björn played a cover of Jump by Van Halen.

Anni-Frid and Agnetha then returned wearing black vinyl overcoats and bowler hats to perform Money Money Money, in which they showered the audience with fake banknotes.

During their encore, Benny played the opening chords of The Winner Takes It All before stopping and saying: “I don't want to play this one.”

They then launched into Dancing Queen after Björn said: “I want to dedicate this to a very special lady - are there any dancing queens out there?”

The show concluded with a full performance of The Winner Takes It All, which was followed by a firework display.