Town praised for conservation work by judges on bloom tour 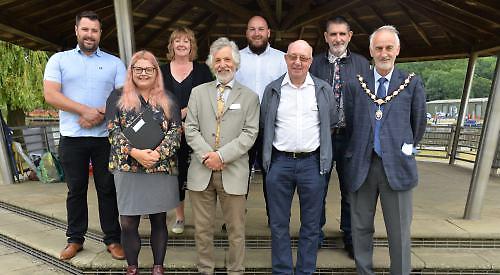 JUDGES praised Henley in Bloom’s care for the environment and the community’s work at the town’s green spaces during a tour last week.

Pete Thompson and Norman Parker were shown around for more than two hours by parks services manager Karl Bishop and Kellie Hinton, vice-chairwoman of Henley in Bloom.

The men were in town to assess sites as part of the Thames and Chilterns regional category of Britain in Bloom.

Henley has re-entered the competition after a year out following the death of the former parks services manager Gareth Bartle, 53, in May last year.

Mr Bartle had worked for the town council for about 14 years and in the six years before his death Henley won consecutive gold awards in the Thames and Chilterns regional category and a national gold as well as silver in Entente Florale in 2015.

The tour took place on Thursday last week in sunny weather and the parks services staff had been working since 6.30am to prepare the town for its inspection.

It started at the bandstand in Mill Meadows where the judges met the Mayor of Henley Ken Arlett, his deputy David Eggleton, who chairs Henley in Bloom, and members of the parks services team.

They saw a 15-minute presentation by Councillor Hinton about the work undertaken by Henley in Bloom throughout the year, including conservation initiatives at Gillotts Corner Field.

This was followed by visits to Greencroft allotments, Northfield End, Badgemore Primary School and the Henley Community Orchard.

Mr Thompson, of Wyfold, said: “It’s the care for the environment that’s really come through. There’s all sorts of different schemes like traffic management and conservation of wildlife areas.

“What we have always seen in Henley is the range of different parts of the community that are involved in Bloom. It’s not just the town council — although they are big supporters. It’s hard to say what the best part was — the celebration beds were interesting.”

He said: “It’s a very small area, which has had a really good job done on it. An awful lot of thought has gone into it. It’s good to see a new group like the Northfield End group. We expect to see great things from them in the future.

“I think the Bloom group is bringing intensity to the whole town. It really is trying to make Henley a better place to live and visit. They only have a limited amount of time to show us everything the town has to offer, so this is going to be very difficult.”

Norman Parker, of Stony Stratford, Buckinghamshire, said: “We are looking for the wonderful community environment. They really, really are such a friendly bunch. It’s also lovely to see the children involved.

“The actual displays are beautifully kept. It’s a wonderful place to come and judge and Henley is such a clean town. We are all very envious when someone else gets this category to judge.”

Following the presentation at the bandstand, senior park and horticulture warden Kyle Dowling took the judges to the living wall at the Leichlingen Pavilion in Mill Meadows. He told them about how it was maintained and the way it was installed.

They then visited the green at Henley Bowls Club where the hedge had been cut to give people walking past the chance to see it.

Sally Daniels, who chairs the club, joked with the judges that she had been “weeding like mad” earlier that morning.

Mr Dowling took the judges to the celebration beds, also in Mill Meadows, where they met gardening buddies Jilly Abbink, Jan Sutton and Joan Edwards, who had been working there since 9am. This year they have been designed to commemorate the centenary of the Forestry Commission with marigolds and begonias. One bed spells out “100” and “1919” while the other depicts the commission’s logo.

Afterwards they moved to the Rotary beds followed by the Marsh Meadows wildlife area, where they met Sally Rankin, of Henley Wildlife Group, and Helen Cook, head of learning at the River & Rowing Museum.

Mrs Cook said: “For us it’s an outdoor classroom. With all our school workshops we try and get outside as much as possible.”

The judges asked about flooding because of its proximity to the river and Mrs Cook replied: “I often see puddles on here, but it’s very rarely unusable. The soil is sandy and there’s a lot of air pockets, which helps with circulation.”

Before they boarded a launch by the riverbank, Mr Dowling showed the judges the stump of a tree which had been turned into a seat. He said: “If any trees have to be removed, we try to create quirky seating.”

The group then boarded the launch, provided by Hobbs of Henley, and heard about the town’s river heritage from Viv Greenwood, from the town’s archaeological and historical group.

They sailed upstream to see the bank on Marsh Meadows before heading downstream under Henley Bridge and towards the royal regatta course finish line.

Mr Dowling pointed out the 6ft 6in bronze mermaid statue at Red Lion Lawn before the group disembarked near Leander Club and Mr Bishop drove them to Greencroft allotments where they met Andrew Hawkins, who has held a plot there since 1973.

Mr Hawkins showed the judges around and allowed them to try his raspberries. He also demonstrated a groundwater pump, which is used to douse the fruit. The judges heard there were more than 100 plots at the site, which is next to Henley Cricket Club.

They were joined by town councillor Stefan Gawrysiak, who spoke about air quality in the town while they drove back across the bridge into the town centre.

He said the town council had been encouraging cycling routes, was focused on traffic reduction, and that 17 planters had been installed in the town centre to absorb air pollution.

Councillor Gawrysiak said: “The other spin-off for greening Henley and having trees and shrubs is the effect on driver behaviour. The message really is we are a green town, so if you see that you will slow down and drive with courtesy through the town.”

After a visit to the communal garden at the Chilterns Court Care Centre at Townlands Hospital in York Road, they arrived at Northfield End and met Helen Gaynor, who leads the Northfield End and Bell Street Residents’ Group. She said: “Most of the time this green was a neglected space. We just felt the area should be looking better.”

Mrs Gaynor explained the significance of the photinia red robin, that was planted at the centenary of the end of the First World War and said residents mow the lawn every two weeks.

Mr Bishop then drove the group around Freemans Meadow to see the experimental flower bed and hedge whips.

The next stop was Badgemore Primary School in Hop Gardens where the judges were introduced to Tuc Ahmad, who governs the Friends of Badgemore School, and headteacher Marion Arnold.

Mrs Arnold said: “The beautiful greens are used to deliver a very good education for our children and we very much believe in forest schools and using outdoor space for learning.”

The judges saw the school’s two pond areas and heard about its beehive, orchard and plans to install a greenhouse.

Mr Ahmad added: “They had been involved in the planting and they get a sense of habitats. Nature isn’t a place we visit — it’s home.”

The tour finished at the community orchard in Paradise Road. The judges greeted children to hear how they had reduced single-use plastic at their school.

They were inspired by entrepreneur Richard Hardiman, who has developed WasteShark, a waterborne drone that tackles plastic pollution in harbours and ports.

The judges then had lunch at Badgemore Park Golf Club with about 20 people, including volunteers, gardening buddies and members of Henley in Bloom.

Cllr Eggleton said he was hoping to win a gold award.

“That’s the overall aim,” he said. “There’s lots of stuff we have been doing throughout the year and different projects we started, which we have only achieved this year.

“We’ve done the celebration beds, more plaques, had the ‘no idling’ campaign and we keep pushing the summer baskets for the town.”

Cllr Hinton added: “We are in a better position than we have ever been before in terms of our efforts for horticulture, community and conservation. We would hope the judging reflects that.

“Primarily we do this because we want the best for Henley and the best Henley. Whether we do well or not I am positive that the feedback will be constructive.”

She said: “They have really pulled out all the stops. I think it goes for the rest of the team as well. We have always had parks wardens that are interested in Bloom, but we have never had the whole team completely enthused by the whole campaign and I think that’s been really special this year.

“I think the judges enjoyed themselves and I think they understand we suffered a massive loss last year. These are judges that knew Gareth personally, and so I imagine it has been as hard for them to judge us this year as it is for us to be judged.”

Mr Dowling said: “I feel we showcased lots of positive projects we have been doing over the year and lots of new things the judges probably haven’t seen in previous Henley tours. I think the volunteer groups worked so hard to get the town up to standard and giving up their time to talk to the judges.”

Mr Bishop said: “The team and all the volunteers have done an exemplary job. They have really worked hard. We take great pride in what we do and we want to show it off in its best light and this competition allows us to do that.

“I would not like to call the award but we have worked as hard as we can. I would like to thank every single person that has got involved. As a parks service there’s only so much we can do with the size of our team, but when we have the strong backing of volunteers, helpers and sponsors as well, it’s just a great community of people coming together for the good of the town.”

The total number of hanging baskets sold by Henley in Bloom this year is the second highest ever. Residents and businesses have now bought 237 baskets, just four short of the record set in 2016.

The results of the inspection will be announced on Monday, September 2.