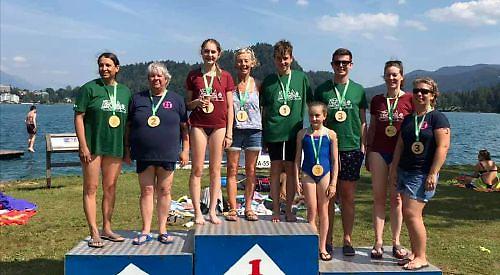 MORE than 24 members of the Henley Open Water Swimming Club competed in a race on Lake Bled.

They were among about 500 people taking part in the annual Bled Swimming Challenge, a 5km or a 1.25km race which attracts elite athletes from across Europe.

The event was followed by a civic reception at the 11th century castle in the Slovenian town with which Henley was twinned in 2013.

The first Henley competitor to finish the 5km race was Cerian Mellor, 42, of Albert Road. She was placed 77th overall in a time of one hour and 26 minutes.

Mr Lane was the first Henley swimmer to finish the 1.25km race in 22 minutes and 40 seconds, placing him 36th with Mrs Mellor six places behind after finishing in exactly 23 minutes.

The trip was organised by the towns’ respective twinning organisations, which commissioned a trophy for the Henley and Bled swimmers to competefor.

Each side was awarded points depending on how its swimmers finished in their age groups and Henley emerged as the winner.

It is hoped that a delegation from Bled will come to Henley next year and the towns will go head-to-head at either the Henley Classic, a 2.1km upstream race along the royal regatta course, or the Club to Pub swim from Henley Rowing Club to the Angel on the Bridge in Thames Side.

Henley club captain Mark Plested, who entered the 5km race, said: “We were approached by the twinning association and thought it was a good idea.

“It was going to be a bit more of an informal swim but then we found out about the challenge and decided to make a weekend of it. The swimmers were of a very high standard. The conditions were perfect because the weather was about 30C and the water itself was about 25C. It was strange for a lot of our members because they’re used to wearing wetsuits.

“It was very different from swimming in the Thames — for starters, the water was crystal clear and there wasn’t a current because it’s not a river. The swimmers from Bled will probably find it quite different when they come over here.

“It all finished at about 3pm and a few hours later the mayor of Bled presented us with our trophy. He’s a lovely bloke and spent a lot of time talking to us about the history of Bled, which he’s really passionate about.

“Everyone had a fantastic time and I’d definitely recommend that anyone visits Bled as the people are lovely and the views from the castle are incredible.

“We stuck around to enjoy some leisure swimming the day afterwards and I’d love to go back at some point.”