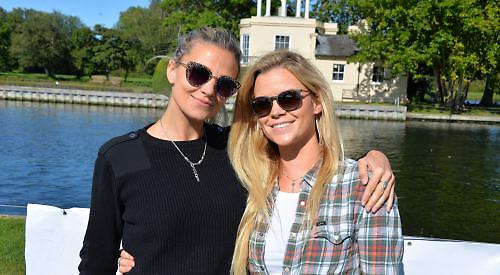 MORE than 200 people took part in a walk to remember their loved ones and raise funds for Sue Ryder’s South Oxfordshire palliative care hub in Nettlebed.

They set off from Temple Island Meadows for the fourth annual Forget-Me-Not Walk on Sunday morning. It was the first year the event had not taken place at Joyce Grove.

They were started by Julian Walker, director of funeral directors A B Walker, which sponsored the event, who cut a ribbon to set them off.

The walkers tackled either a 5km or 10km route. Many wore T-shirts commemorating loved ones they were honouring while others wore Sue Ryder T-shirts.

Jessica Edwards, from Marlow, walked with her mother Maggie, from Shiplake, in memory of her father Steve who was cared for at the hospice in 2016.

Miss Edwards said: “They were really supportive and amazing. Nurses felt like friends towards the end. It was a happy, homely feel in that building up at Nettlebed.”

Her mother added: “It’s about raising money and remembrance.”

Sisters Rebecca and Laura Poole, who grew up in Nettlebed, were walking in memory of their father Michael who was cared for at the hospice in the last two years of his life.

Rebecca, a singer, said: “We lost our dad at the end of November and Sue Ryder cared for him and did such an amazing job. We just wanted to give back and say ‘thank you’. The carers really do go that extra mile to make the patients feel looked after.”

Her sister organised a giant sponsored dog walk for the charity in memory of her father in April and plans to do the same again next year.

Fern Hayes, head of hospice fund-raising, said: “We had a couple of big family groups taking part. Some families raised more than £1,000, which is lovely.

“We had a dedication tree as they came in at the end so people could hang ribbons on it in memory of their loved ones.

“We were really pleased but we want it to be bigger and better next year. As we expand our community care we want to expand our events as well.”