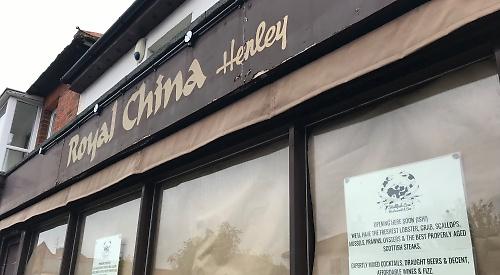 A STEAK and shellfish restaurant will open in Henley in November.

The new business will create about 20 jobs.

Mr Wornham, 51, said they had always thought of Henley as a good place to open a restaurant and they were among the participants at the inagural Eat! Food Festival in June.

He said: “We looked at a couple of sites in Henley before we found the one in Wallingford. We love the vibe in Henley.

“The new restaurant is based on the success of Wallingford. The feedback that we get is just absolutely fantastic — people are gushing with enthusiasm.”

He said they were not concerned about the competition, adding: “I am a great believer in healthy competition and I would say the more restaurants in Henley the merrier. We want to make it a destination for people go to for dinner.”

Both men, who have been friends for many years, have a background in hospitality. Mr Wornham owned two restaurants in Covent Garden for about 30 years until he sold them five years ago.

He lives in Brightwell-cum-Sotwell with his wife Jo-Anne and children Georgia, 17, who attends Shiplake College, and Louis, 15, who is studying at University Technical College in Didcot.

Mr Hodder, 59, spent 10 years in the industry and before that he was a financial advisor for 30 years in both London and Wallingford.

He lives in Wallingford with his partner Katie and has two children, Joel, 26, and Hayley 23.

The idea for Shellfish Cow came to the pair while they were playing golf.

Mr Hodder said: “We played golf regularly and would wonder where we should go to eat. Both of our favourite food is shellfish. We had this conversation a few times and we couldn’t find anywhere, so eventually we thought, ‘we have to do it’.

Mr Wornham said: “I spent far too much time on the golf course after selling the businesses in Covent Garden. One day it rained and we wanted to find somewhere we could go for some food, but we couldn’t find anything we wanted and that sowed the seed for this business.”

Mr Wornham said the success of their Wallingford restaurant had been helped by his wife Jo-Anne, who designed it.

He added: “She has a brilliant eye for what we want. Obviously, the food is terribly important, but it is only part of the story. We try to achieve a relaxed and quirky atmosphere and a lot of that is achieved by what Jo-Anne does.

“When people write reviews about us, pretty much everybody mentions the food and the décor going hand in hand.”

Mr Hodder said: “Our restaurant in Wallingford is very different from anywhere else. It is going so well.”

Like the Wallingford restaurant, the new business will have a menu featuring crab, lobster, oysters, mussels and a range of steaks.

Mr Wornham said: “We have absolute confidence that if we deliver as we have done in Wallingford, then we will be well received. We will open when we are satisfied that everything looks right and we have the right menu and the right team. Even though it is luxurious food we price it fairly because we want people to enjoy more exclusive dishes.

“It is all about the people and the team that you work with. Jackie and Jason are friends and when they showed an interest in relocating to the area I was absolutely delighted.

“Finding quality and dedicated people is like finding hen’s teeth.”

Mr Hodder said: “Our aim is to open by the end of November and we will probably have a launch event. We are really looking forward to it and can’t be ready soon enough!

“We like to be quirky and we are going to concentrate on the quality of the shellfish we get. We won’t rest on our laurels; we want to improve.

“We already have a good relationship with Henley residents. A lot of them come to our restaurant and wanted to know when we are moving to Henley.”

Helen Barnett, Henley town and community manager, said: “I think the restaurant will be a wonderful addition to Henley’s food and drink scene.

“I know they trade well in Wallingford and by being at the Eat! Food Festival they have already entered into the spirit of Henley.”