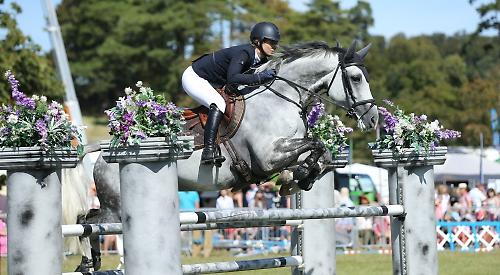 HORSE show entries at the Henley Farm & Country Show increased by 25 per cent on the previous year’s total.

Organisers said changes had been made to the schedule to make the competitions more inclusive to local riders.

The increase also coincided with the rebranding of the former Henley Show, which took place at Greenlands Farm, near Hambleden, on Saturday, September 14.

The 128th annual event, which is organised by the Henley & District Agricultural Association, attracted more than 15,000 visitors.

Alison Abrahams, the horse and heavy horse show secretary, said: “We had an increase in the number of entries. It was quite a turnaround.

“Because Henley is such a local and family-orientated show, we took away all of the affiliated classes for showing, which had previously restricted the local residents from entering.

“We made them unaffiliated and we increased our entries in every showing class.

“We also had lots of families coming back to the show that had missed a few years.

“We did an extra jumping class for local people to enjoy, which proved to be very popular, and I would hope to see even more people come for that next year.

“It is fantastic for families to be able to sit and watch their children taking part.

“We split ring three in half so that we could increase the number of classes and competitors and that proved to be successful.

“It is definitely a work in progress to adjust a schedule of this size and to make it more attractive for visitors.”

Mrs Abrahams, who lives in Hambleden, has been judging the showjumping for more than 15 years and was asked to become horse and heavy horse show secretary last year.

She was delighted to receive glowing feedback from county and international riders.

Showjumper Jack Whitaker, who competed in the area trial with El Wee Widge, said he was impressed by the quality of the ground. Mrs Abrahams said: “I was delighted to see a number of top riders taking part.

“They had no idea how good the show was and they said the ring was amazing. Jack said it was the best ground he had jumped on all year.

“When you get that kind of feedback, you know you are doing things right.

“We do put in a lot of time and effort, so I was delighted to hear that.

“The sunshine helps the gate massively but for professional competitors who want to ride for money, they come if they know the ground is good.

“The ground does get hard and compacted because it is used by a lot of people throughout the year, so you have to do a lot of work to maintain it.

“It is a lot of labour and hard work by the showground contractor John Williams but he has to do that work to make it the best it can be.”

There was also a change in the way prize money was handed out in the main ring with some increases and prize money going to entries all the way down to eighth place.

Mrs Abrahams said: “We have brought back the classes that people enjoyed and I think the one sure thing is that unaffiliated will stay to give everyone a chance of competing.

“It was wonderful to see so many people in the ring supporting the show. The sheer volume of entries was fantastic. We had great weather and everybody enjoyed themselves. That is all you can ask for when you are the one preparing the schedule.”

Helen Tredwell, who came third in the area trial with Sebastian VII in 2017, returned with Galtur to win first prize.

There was also victory for Danielle Thatcher and Summer Seat Road in the local jumping category, with Eleanor Thompson and Samantha Swanson finishing second and third.

The full results are below.