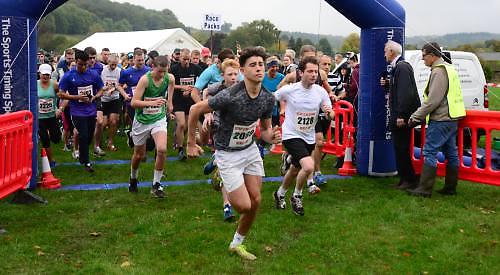 MORE than 600 people took part in the 37th Henley half marathon and accompanying Henley Standard 10km run despite heavy rain.

The races started and finished at Borlase Field, next to Henley Rugby Club off Marlow Road, on Sunday.

The Mayor of Henley Ken Arlett started the races while town councillor Stefan Gawrysiak ensured the runners lined up correctly.

As they got into position supporters and family jostled for position to film and take photographs on their smartphones.

The 10km runners set off first at about 9.30am and followed Marlow Road out of Henley before they turned into Icehouse Lane and climbed the steep hill in the direction of Fawley.

They were cheered en route and returned via Middle and Lower Assendon and the Fair Mile before heading back to the finish at the rugby club.

Participants in the half marathon ran across Henley Bridge towards Remenham and the Flower Pot in Aston.

They returned along the towpath and crossed the bridge once again before heading onto Fawley, Assendon and back to the rugby club via Fair Mile.

The event was organised by the Rotary clubs of Henley and all proceeds will go towards charities they support.

For the full story, pick up a copy of this week’s Henley Standard.